I found a cool article with multiple historians’ best stabs as to the reasons why the South lost the American Civil War. It’s worth a read on its own, but most of the reasoning seems to fall into one of three categories: manpower, morale, or leadership.

The North, by most accounts, had approximately a 3 to 1 advantage in population, which meant that the Union Army could be larger, sustain larger losses, and continue fighting to a greater extent than the Confederates. This is probably the most important reason, though smaller armies have won wars in the past, like in the American Revolution.

Morale, on the other hand, is a more contested reason. Some think that the South’s losing streak that started in 1863 eroded their will to fight, even if they still could have won the war. Others maintain that morale and determination remained high until the end.

Finally, leadership. Most historians seem to take the position that Lincoln was a much better president than Jefferson Davis, both in terms of military strategy and in garnering public support for the war. But, modern historians tend to be more critical of the South’s generals, as well, claiming that the only one that was not only good but also competent was Robert E. Lee. On the other hand, the North had at least three quality commanders, Grant, Sherman, and Sheridan.

What struck me was that within the confines of the conflict, any of these three factors on their won might have been enough to win the war.

But that doesn’t mean that the outcome was inevitable.

Let’s suppose for a moment that the South, in theory, could find ways to get around these problems.

George Washington didn’t do it alone. He had the help of men like the Marquis de Lafayette and Friedrich Wilhelm von Steuben, who served as military advisors and generals in Washington’s army, which compensated for a lack of native-born military leaders. Adding two good military leaders to the South makes the North’s advantage look less significant.

That also might correct the second problem, morale. Having better leaders means you win more battles, and winning more battles increases your own morale and lowers your enemies’.

And, while foreign intervention can do nothing to increase the number of people who could serve in the army, they could bring their own armies. This is not unprecedented. Britain stationed armies all over the globe at this point and France was invading Mexico at this time. Getting the support of either country or both, could easily have been significant enough to turn the tide of the war.

But, was such a thing possible? How could the South hope to sway two countries that had abolished slavery earlier in the century? 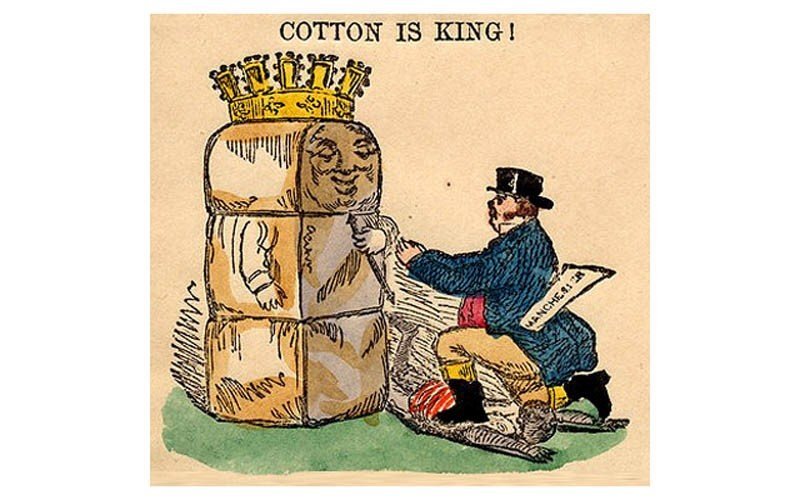 The idea that these dependencies could be leveraged to bring those countries into the war on the side of the Confederacy was sometimes called “Cotton diplomacy.” By restricting exports, the South could damage the economies of France and Great Britain, which in theory could force them to intervene on the South’s behalf.

We can see the first flaw upfront: hurting someone’s economy isn’t likely to make them friendly to you, even if it is in their best interest. Furthermore, the South took away one of its major sources of income. Later, when they wanted to restart the trade, the North had put a blockade into place which severely restricted their ability get cotton out of the country.

Long story short, America would fight any European that sought to expand its influence in the Americas.

So, seeing the North and South a bit occupied, Napoleon III of France invaded and conquered Mexico and set up a client state, The Second Mexican Empire, with a member of the Hapsburg family, Maximilian I, as Emperor.

The end of the Civil War led to a reestablishment of the Monroe Doctrine, and Napoleon III reversed course, withdrawing his troops from Mexico, which led to an abolishment of the monarchy via an execution of the emperor.

As it turns out, France had a natural ally in the Confederate States. If they had chosen to help them, things might have turned out better for both countries.

Great Britain, on the other hand, presents a more complicated picture.

The embargo on cotton, and later, the blockade, led to what is now known as the Lancashire Cotton Famine. Lancashire, England was a big center of the cotton-textile industry, and the shortages in cotton led to the closure of factories and mass unemployment in the area. While the owners sometimes switched to other kinds of cotton imported from other places, there wasn’t enough of it to go around, and not all factories had equipment that could be switched over to different cotton varieties.

People responded in different ways to unemployment. Some wrote exceedingly depressing poetry, while others left the country or rioted. Amazingly, most of the anger seems to be directed at the mill owners and the British Government, neither of whom were at fault. The government was slow to respond, though, waiting until 1864 to pass the Public Works Act, which allowed cities to borrow money to finance public projects.1

As you might predict, there were some calls for Britain to use its navy to smash the Northern Blockade.

But, then something extraordinary happened.

Unemployed people gathered together in Manchester in 1862 and wrote a letter to Abraham Lincoln, declaring their support for the embargo as a means for ending slavery in the United States. A completely unexpected stand on principle, from people who had little to gain from it. Really, really cool stuff.

There were also countervailing economic factors. Britain imported more than 40% of its grain from the North, and had poor domestic crops in 1861 and 1862, making that dependence even more significant. British banks had also made loans to companies in the North and entering the war on the South’s side might lead to the destruction of those companies, which would cause defaults on the loans.

Are these things historically significant?

Only in that what happened, happened, and what didn’t, didn’t.

The South thought that King Cotton would come to their aid, but when the chips were down, it was discovered that the Emperor had no clothes.

I’ll leave you with the letter that Lincoln wrote in reply to the one he received from Manchester:

I know and deeply deplore the sufferings which the working people of Manchester and in all Europe are called to endure in this crisis. It has been often and studiously represented that the attempt to overthrow this Government which was built on the foundation of human rights, and to substitute for it one which should rest exclusively on the basis of slavery, was likely to obtain the favor of Europe.

Through the action of disloyal citizens, the working people of Europe have been subjected to a severe trial for the purpose of forcing their sanction to that attempt. Under the circumstances I cannot but regard your decisive utterances on the question as an instance of sublime Christian heroism which has not been surpassed in any age or in any country. It is indeed an energetic and re-inspiring assurance of the inherent truth and of the ultimate and universal triumph of justice, humanity and freedom.

I hail this interchange of sentiments, therefore, as an augury that, whatever else may happen, whatever misfortune may befall your country or my own, the peace and friendship which now exists between the two nations will be, as it shall be my desire to make them, perpetual.