What Happened to Tycoon Games?

What Happened to Tycoon Games?

The other day, a friend commented to me that something seems to have happened to the tycoon game genre. Namely, it doesn’t seem to exist all that much, anymore.

My knee-jerk reaction was to agree with him. I can name a number of games that fall into this category from my childhood, including SimGolf, various members of the SimCity family, Locomotion, Railroad Tycoon 2 and 3, Sid Meier’s Railroads, Zoo Tycoon 2, Restaurant Empire, Ski Resort Extreme, Mall Tycoons 2 and 3, Mall of America Tycoon, Deep Sea Tycoon1, School Tycoon, Moon Tycoon, Construction Tycoon, and so on.

To be clear, when I’m talking about tycoon games, I’m talking about games that simulate running a business, with an eye towards expansion. Combat is absent from the games, and in many cases, there may be no way to “win,” and satisfaction is instead derived from always trying to build a bigger and more successful company.

So, what’s going on with the industry? Were our feelings justified?

Looking around the internet, I’ve found a couple of forum posts that suggest we’re not alone in this feeling. One thing that some posters suggest, however, is that tycoon games aren’t gone but don’t have the appeal that triple-a games have today. Others suggest that the field is flooded with shovelware.

An easy way to test this theory is to search for the term on Steam, the popular online game store/service. The first page includes Rollercoaster Tycoon 1, 2 and 3, Railroad Tycoon 2 and 3  and a few expansions for those games, meaning that these games released a decade ago, or longer, make up more than 20 percent of the games that you’re likely to be recommended, which seems a little odd, and suggests a lack of innovation within the field.

And, I’m going to be honest, here. Most of it does look like shovelware. Cheap and poorly-rated.

That’s not to say there aren’t any good tycoon games recently released. Railway Empire, Surviving Mars, and Cities: Skylines are all games that could potentially be grouped into the tycoon genre, but none of them feature “Tycoon” in the title.

Yet, these games are the oddities, costing a decent amount and having good ratings.

So, what’s up with the industry?

The prevalence of cheap games suggests that game sales are not that great.

That’s a problem, especially as the cost of developing a top-tier game has risen steadily over the past 20 years: 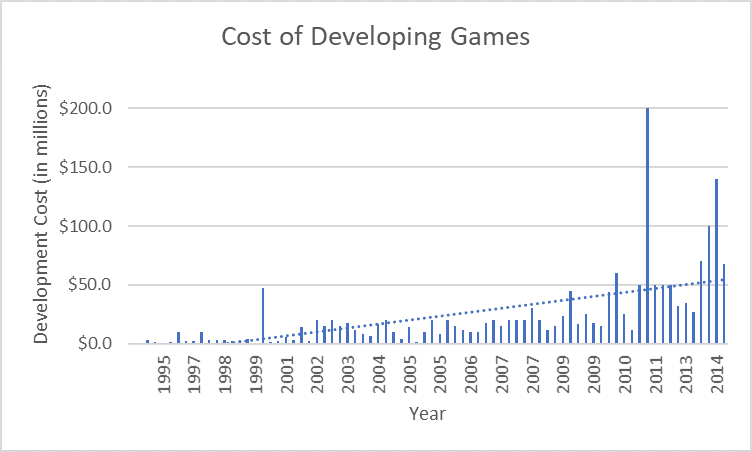 It’s worth pointing out that the average cost quintupled from 1994-2014. After 2006, you don’t see games being made. And if I’m right that the industry doesn’t move that many copies of its games, high costs will prevent profit. Even if interest in the game genre remains steady and loses no players to newer FPS and MOBA games, having to keep up with graphics quality and production value might not have been sustainable.

After about 2006, development budgets for games no longer dips below $10 million. I think this is a significant year for multiple reasons, but that’s the first.

Other ongoing trends include the release of smartphones, ushering an era of “casual” mobile gaming, which may have eaten up some of the pie that tycoon developers had relied on. Furthermore, the seventh generation of videogame consoles, which included the PlayStation 3, Xbox 360, and the Wii, were released from late 2005 through late 2006.

Tycoon games, with their detailed menus and typical need for precise on-screen selection seems to be hard to port to consoles, which include controllers. The sixth generation of consoles sold very well and many companies focused on creating games that would do well on them. Games for these consoles also retailed for $60, more than the typical tycoon game which sold for $40-50, meaning that you’d have to sell more to make your budget back. Furthermore, the Wii probably ate up more of the casual market in the same way mobile phones did.

But, there’s another reason 2006 was a significant year.

It’s the last year in which Sid Meier released a game in the tycoon genre, Sid Meier’s Railroads. The man behind Railroad Tycoon and SimGolf has stopped making tycoon games. See for yourself:[The Civilization series, while excellent, is not a tycoon series.[/note] 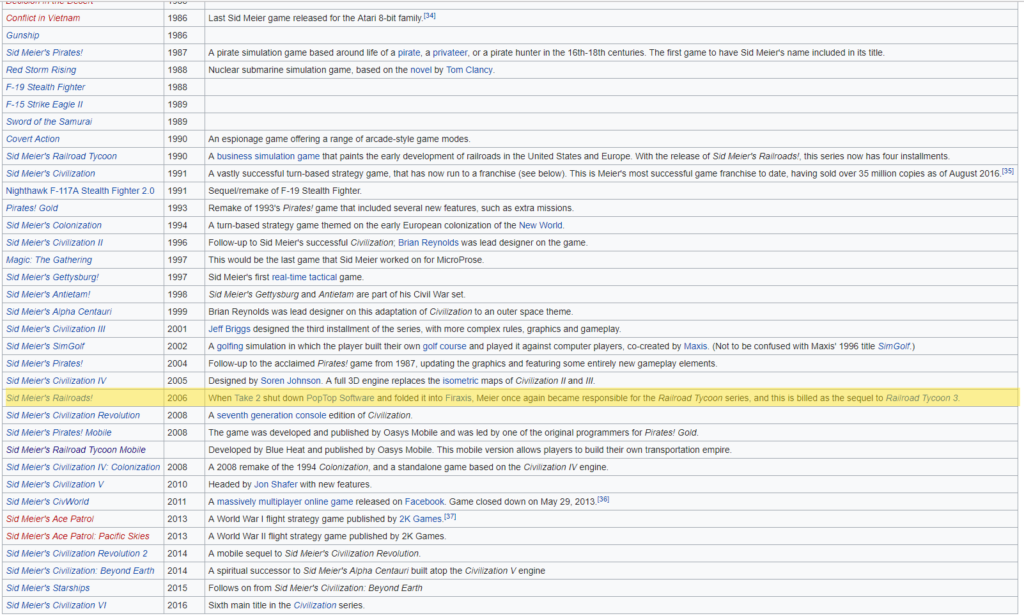 Likewise, Chris Sawyer, the mind behind Transport Tycoon, RollerCoaster Tycoon, and my all-time favorite game, Locomotion, has not made an original game since 2004. It’s interesting that he has since ported two of his old games to mobile. 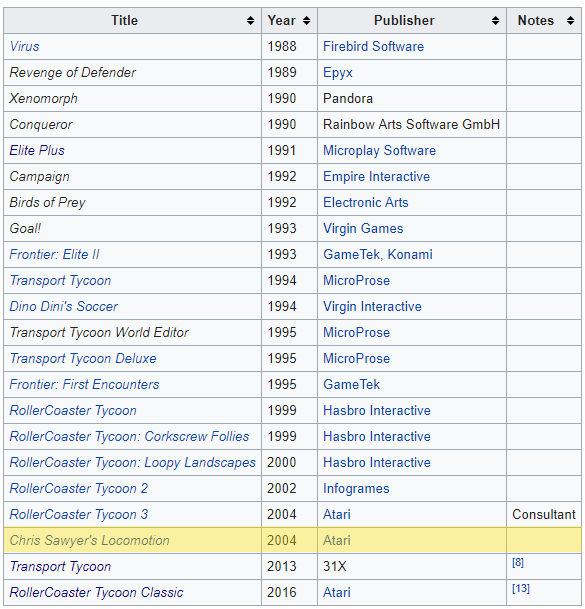 Likewise, Blue Fang Games, the company behind Zoo Tycoon 1 and 2, no longer exists. After Zoo Tycoon 2 was finished in 2004, they ported both that game and the original to the Nintendo DS, made a Wii version called World of Zoo, made a couple of mobile games and games for Facebook, and then shut down entirely.

Just like that, three giants of the tycoon genre were out of the industry entirely.

I found a recent interview here, where Chris Sawyer frames his withdrawal from making games as a mix of exhaustion and being “turned-off by the trend for games becoming more violent and destructive.” Which is all well and good, but if those were the only factors driving people out of the industry, newcomers would have risen up in their place.

Which leads me to have high confidence in my economic analysis. The industry became more expensive to develop more, and success became more dependent on having big marketing budgets, which left little room for games that sold for less money and had to compete with smartphones, Facebook, and the Wii.

While tycoon games still get made, their golden age appears to be long over.