Why Does the “Fast & Furious” Series do Well Overseas?

Why Does the “Fast & Furious” Series do Well Overseas?

I’m probably committing something of a cardinal sin today, in that I’m writing about a movie, or to be more precise, a series of movies that I have not seen. While that might not be fair, I have to admit that it is a series of movies for which the trailers make me want to run far, far away from the films themselves. The Fast & Furious films just look so awful. Take a look for yourself:

The Fast and the Furious series is something of an enigma. I say that because I have trouble seeing myself going to see any of these movies, and yet the series is the 6th highest grossing film series of all time. To put that in perspective, the series lags only behind the Marvel Cinematic Universe, Star Wars, Harry Potter, James Bond, and The Lord of the Rings in terms of worldwide box office, and is just head of the X-Men, Spider-Man, and Batman franchises. While I don’t necessarily want to go see all of the movies from all of these series, I can at least picture someone wanting to do so.

So, I was really curious as to why the movies are still around. I started by looking at the raw numbers and I made you this nice graph: 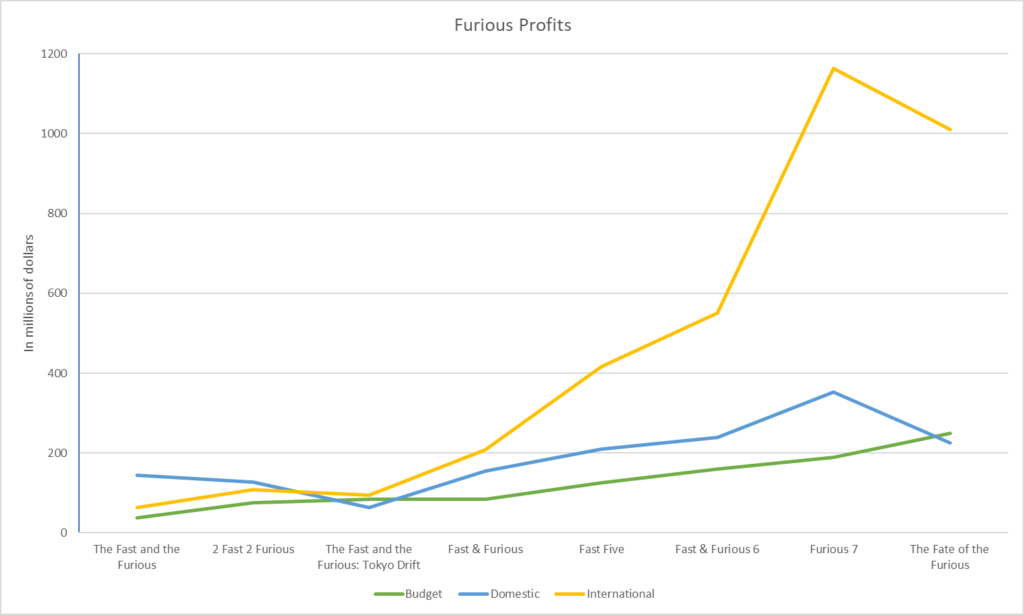 Just looking at the data can tell you a couple of things. The first three movies didn’t do much but make back their budgets, maybe with a little bit extra on top. But starting with the fourth movie, Fast & Furious, things started to go crazy in the international market peaking at almost $1.2 trillion earned overseas by Furious 7.

So, what happened? Why did the movie suddenly start doing so well overseas?

The first part of the answer lies in the fact that Fast & Furious is the first direct sequel to the first movie in the series.

Sure, 2 Fast 2 Furious came second, but it was more of a spin-off adventure featuring a character from the first movie, a cop, that had fallen in love with the main character of the first movie’s sister. Which is a problem because that main character leads a gang of thieves that carries out their heists using cars.

And while Tokyo Drift is the third movie, it features none of the characters from the previous two movies, save a single cameo at the end. In fact, it has since been retconned to take place sometime after the sixth movie in the series, with a few scenes taking place at the same time as the seventh.

So, the fourth movie is actually the first direct sequel, bringing back the original cast, and continuing their story. The rest of the movies are a continuation of this main story.

But, that doesn’t explain why these movies do so well internationally.

Part of that picture is made clear by the biggest addition to the cast in the fifth movie. Dwayne Johnson, wrestler turned movie star, is the 12th-ranked actor of all time in terms of international box office sales, wedging him between Leonardo DiCaprio and Will Smith. And accordingly, there’s a big jump in international box office gross from the fourth to the fifth movie.

But, that can’t possibly be the whole picture, since his ranking is due in part to the success of these movies.

When I started trying to answer my question about why these movies did so well internationally, I was directed to a lot of people who talk about the money that movies make. And, they rarely agree on why these movies have started making so much money. Some think it’s because the movies feature a diverse1 cast, others chalk it up to a lack of competition in April, the month that the movies come out.

Some are a little more forthright, writing that “It’s hard to say exactly what plays disproportionately well overseas. Old-school butch movie stars go down well. US comedies very definitely do not. Both Star Trek and Star Wars perform poorly in relative terms. (Though the numbers involved with the latter are so enormous it hardly matters.)”

Part of the problem with these analyses is that they reduce a complex issue into just a single factor. They seem to be saying “if you just do ___, then you’ll make a lot of money overseas.”

It can’t be that simple, can it?

You’re not alone if you find these kinds of answers unsatisfying. I’m in the same boat, but I was about to try and sell them to you before I came across a little throwaway quote from the Fast & Furious series producer at the bottom of an article: “It did start as a B film, and I don’t use B film as a negative,” [the producer] said. “It had a specific audience we were going after, and we were lucky enough that in each movie we’ve been able to grow our audience organically versus trying to make a movie for everybody right from the beginning.”

Well, I guess they’re trying to target someone, but I wasn’t quite sure who it was until I stumbled across this aptly-named article, “5 Hollywood Secrets That Explain Why So Many Movies Suck.”

Down in the body of the article, the authors make the claim that “to make a movie that appeals equally to American, Japanese, Korean, German and Mexican teenagers, you need to simplify [everything] down to things they all understand equally. Anything dealing with, say, the subtle trials and hardships of everyday life in the American Midwest is going to be totally lost on someone from the other side of the planet.”

There’s no reason to be subtle in your writing or to try to include jokes or specific cultural references if all of that is going to be lost when the movie gets translated into a different language.

To sum it all up, the Fast & Furious series is no so much about creating a movie for Americans, as it is about creating a movie that is a cultural blank slate. It’s supposed to be fun and exciting, yet simple enough that there won’t be much lost in translation so that people from anywhere on the globe can enjoy the movie.

And apparently, they do, and in great numbers.

If you liked this article, be sure to check out:
Should Netflix Originals be Eligible for Oscars?
Cars 3: A Review
A Solo Review