Are College Degrees Worth It?

Are College Degrees Worth It?

So, here’s the deal. I’m about to tell you a story that’s hard to find on the Internet, vast as it is.

If you search for the question that titles this piece, you will find more than enough evidence that yes, college is worth it. While the numbers vary, these sources usually suggest that having a college degree will earn you at least $700,000 more over your career than a high school diploma alone.

Even if you spend a ridiculous amount of money on schooling, like $100,000, you’ll still make a profit on your investment. In fact, some would suggest that college degrees earned today are worth more than they were in the past: 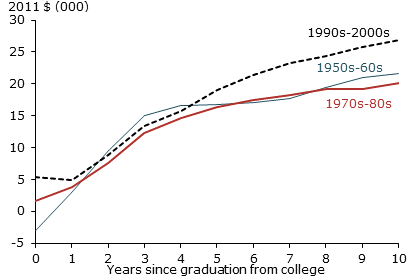 Why are we asking if college is worth it so much?

If the clear, undisputed facts of the situation were that college degrees are in most situations, completely worth it, we wouldn’t be asking the question so much.

There are a couple of possibilities as to what is going on.

It’s possible that we’re just having massive, communal cognitive dissonance. The facts are right there for us to see, but something is preventing us from seeing them for what they are. And to be fair, I can’t prove that’s not the case.

Or, perhaps there’s something else going on that is obscured when we only look at career earnings numbers.

So, let’s use an analogy.

Imagine that having a job is like riding a rollercoaster.

If you only have a high school diploma, you only have access to the crappiest rollercoasters. You won’t make as much money, but at least it’s free. There’s a chance that you might end up on a nicer rollercoaster, but it’s not as easy to get on one of those if you don’t go to college.

Now, let’s imagine that you’ve gone to college. Going to college is like purchasing a ticket to ride the nicer, better-paying rollercoasters. Once you have a ticket, you stand in line until you get a job, and then you ride the rollercoaster. Across the course of the ride, you’ll make more than those who didn’t buy a ticket.

But, here’s the kicker.

It doesn’t matter how much you spend on the ticket itself. The value provided by college is so high that in almost all circumstances it’s worth it, if purely from a financial perspective.

The ride itself also doesn’t matter. In most cases, you’re going to do a lot better than those who didn’t buy a ticket.

But, what if there’s something wrong with the waiting in line part?

This might sound like a radical claim, and maybe at first, it won’t seem like it has anything to do with colleges, but hang with me.

So, something weird is happening in the economy as a whole. It’s called “degree inflation,” and the short version is that positions that used to not require a college degree are increasingly filled with college graduates. Some have pointed out that “employers are seeking a bachelor’s degree for jobs that formerly required less education, even when the actual skills required haven’t changed or when this makes the position harder to fill.”

There are a lot of reasons that this is happening. More people than ever are graduating with college degrees or some college, and this means that there’s a larger potential worker pool than there was in the past. Additionally, businesses are increasingly using college degrees as a proxy for social skills, a trend exacerbated by the Internet. Since businesses increasingly rely on online job boards, face-to-face interviews now happen much later, so a college degree helps reduce uncertainty about the applicant’s quality.

This has radical effects on hiring. If jobs that didn’t require degrees now do, upward pressure is applied on the whole system. In my experience, jobs that should be entry-level college jobs now require not only the degree but also relevant experience in the field. Jobs that would have required a bachelor’s and experience now require an advanced degree. And so on.

All this despite the fact that the skills required to complete the job haven’t changed, and that there was recently a record high in job openings in the United States.1

This is happening against a backdrop of “schools . . . increasingly concentrating on teaching what they perceive to be the technical needs of their students’ potential employers,” even as “prospective bosses [think] they aren’t doing a very good job of it.” That quote is from Dr. Joseph Childers, Dean of the Graduate Division at the University of California, Riverside. He goes on to say that “neither students nor employers believe students are adequately prepared for moving directly into the workplace.”

He suggests that colleges are good at “teach[ing] students how to think critically, to communicate effectively, to manage large amounts of information efficiently, and to quickly learn, evaluate, and use new information.”

In fact, if colleges focus on preparing you for a vocation, they’re doing the business’ job. Every business is different, and consequently, the training for each will vary. But, if they hire a person who manages information well, thinks critically, and quickly learns, then training them to be the worker they want should be easy. If they expect them to already be trained, then they run the risk of the person lacking those relevant skills.

This might be why companies are having trouble finding qualified candidates. They’re setting their criteria wrong.

But, let’s go back to our metaphor.

Say you’ve just finished college. You’ve bought your ticket, and you’re now in line, excited to see which of the great rollercoasters you get to ride. Except, now, your ticket doesn’t buy what you thought it did. You’re forced to either go back and buy another expensive ticket to ride the rollercoaster you want to ride, or you have to ride a lesser rollercoaster, for which you’re overqualified and likely to be underpaid.

Think about it: the former entails delaying your income-earning years or might just be impossible on its own. The latter, while bringing in income, might mean that you will lack advancement opportunities that would have otherwise been available, hurting your future earnings.

Now, to be fair, neither of these things are the end of the world.

Hard work and determination will, on average, allow you to bypass these boundaries.

But, we’re talking about the value of college here.

When you go to college, you’re essentially being promised that you’ll get to ride the nice rollercoasters when you’re done. If that doesn’t happen, then the value of college was lower than the value you expected. Sure, you might still make more money across your career, but the fact still stands that the promise that was made was not kept, even if it’s hard to put a price tag on that.