Can I Get Across the Border Using Only the Internet?

Can I Get Across the Border Using Only the Internet?

I stumbled across an article yesterday on my phone, and while I can’t track down the exact one I was reading, there’s a similar one here. In short, Scott Daniel Warren, an instructor at Arizona State University was arrested for harboring or concealing two illegal aliens. Warren is a member of the organization No More Deaths, which was founded to prevents the deaths of those who were entering the country illegally and consequently dying in the desert. They achieve this goal, in part, by leaving supplies like water, unattended in popular crossing areas. While I think there’s a lot to be said about the potential moral and legal flaws with this plan, I was struck by something else in the article.12

The article which I read on my phone, which I can’t seem to find today, commented that the illegal aliens found their way into the United States and eventually to Warren’s place by using the Internet. My quest today is to see if I could conceivably do the same.

I already have a couple of potential leads. Obviously,  it’s worth checking out Professor Warren to see if he’s left any clues on how such a task might be accomplished.

When I started looking into Warren,3 I found an old CV of his and discovered at a lot of his academic work actually revolves around illegal immigration.  The title of a presentation given at a conference in Montreal gave me my first clue: “Crossing the Border at Arizona’s Ironwood Forest National Monument.”

You can imagine my surprise when I discovered that the Ironwood Forest National Monument isn’t actually on the U.S. border with Mexico.

The U.S. Border is actually that purple-and-black line at the bottom-left corner of the map. Now, I can see the appeal of this particular place as a border crossing point. If you go further west, you’ll eventually cross into the Barry M. Goldwater Air Force Range, which is apparently used day and night for training the air force in various kinds of bombing runs. Not the kind of place you want to just casually wander into.

If you headed further east, you’ll find yourself in a rather mountainous area, which would make the trip much harder. It’s possible my analysis is wrong, and that someone living near the border would tell me something different, but, I’m trying to plan my trip using just what I can find on the Internet.

Okay, so the glaring problem I have right now is that Ironwood Forest National Monument (IFNM) isn’t actually on the border. Standing between it and Mexico is the Tohono O’odham Nation Reservation. Since it seemed like IFNM was a hotspot for illegal immigration, I expected the Tohono O’odham to have a somewhat permissive stance on illegal immigration. Boy, was I wrong.

As far back as 2003, the tribe has a well-documented opposition to illegal immigration. While not universal within the tribe, many members report this opposition because illegal immigrants victimize them, stealing cars and robbing homes during their progress north. Compounding the problem are the random searches and abuses perpetrated by federal agents drawn to the area by the influx of illegal immigrants. And even though many members of the tribe resent the federal governments’ intervention, they also recognize that they don’t have enough people or enough money to deal with the problem themselves.  Further complicating matters is the fact that historical Tohono O’odham lands lie on both sides of the border, and some members wish to have free movement between the two sides.

And that’s why, if I were to smuggle myself across the border from Mexico into the United States, I’d choose this spot. There are a number of reasons, the first of which is the absolute dysfunction of enforcement on the Tohono O’odham Reservation. The lack of coordination between the tribe and federal officials lowers the likelihood of getting caught.

It’s also a relatively safe area in Mexico. The U.S.-Mexico border region is rife with Drug Cartel activity, but this particular border crossing is smack dab in the middle of Sinaloa territory. 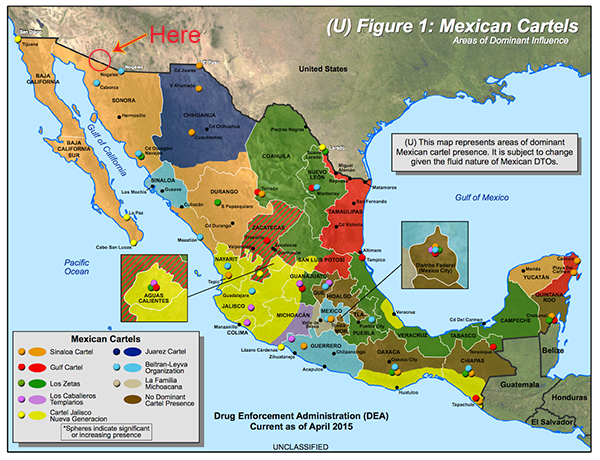 While that might not sound like a good thing, it’s actually one of the less-violent areas and is far away from the borders between different gangs, which means that inter-gang violence is less likely.

And then, there’s the border itself, which is protected by this fence: 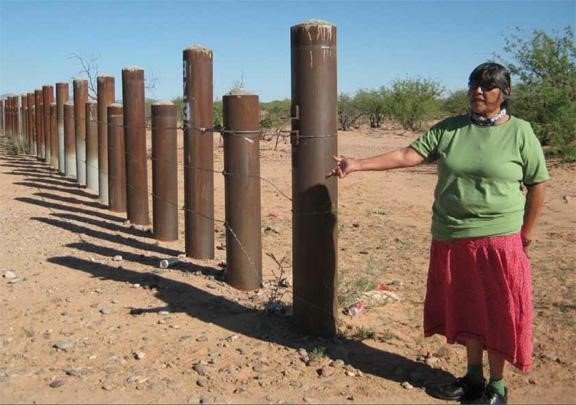 That’s not much of a fence. As it turns out, it was designed to stop vehicles from crossing, and it would be possible to get past it as a person on foot with or without a pair of pliers.

And then, finally, there’s the Sonora Desert that needs crossing. It’s going to be hot in the summer and cold in the winter. I’d probably try and cross in the summer because there would be slightly more plant cover to hide in, which just leaves me with the problem of the heat. I’d have to buy or steal a backpack and a lot of water, but as it turns out, there’s already an organization leaving water out in the open for me to use as I cross the desert and try to make my way to the nearby towns of Tucson or Phoenix, where I would hope to catch transportation back to Dallas.