The tide may be turning against Facebook. The social media service is embroiled in a number of problems that are in part of its own making. Recently the company admitted that using Facebook could make you unhappy or lower your mental health. An early investor has claimed that the service was designed to be addictive. And, during the last, divisive, presidential election, the service was accused of spreading “fake news.”

The company has recently responded to some of these issues, promising to change the algorithm that chooses what content is shown in your Facebook feed to better emphasize content posted by friends and family. However, the reports about Facebook’s shortcomings aren’t new. The company isn’t responding now out of the goodness of its heart, rather, it’s putting out fires.

And, with more than 2.1 billion active monthly users, Facebook is one of the biggest companies to ever exist. Since there are around 7.6 billion people on Earth, almost 28% of the world’s population uses Facebook at least once a month. These are almost unfathomable numbers. The company also exists in something of a duopoly with Google, as the two companies combine for more than half of U.S. digital ad revenue and almost 99% of year-over-year growth in the sector. There may be competitors, but they’re getting left in the dust.

Considering how influential Facebook is, and how the company has admitted to using its service to manipulate people’s mood for testing purposes, there may be a solid case that the company is too powerful and needs to be broken up for the benefit of the customer. There’s a case to be made that Facebook is a Monopoly.

This leads us to a couple of pertinent questions:

Figuring out if Facebook is a monopoly shouldn’t be that hard. Just look at this chart: 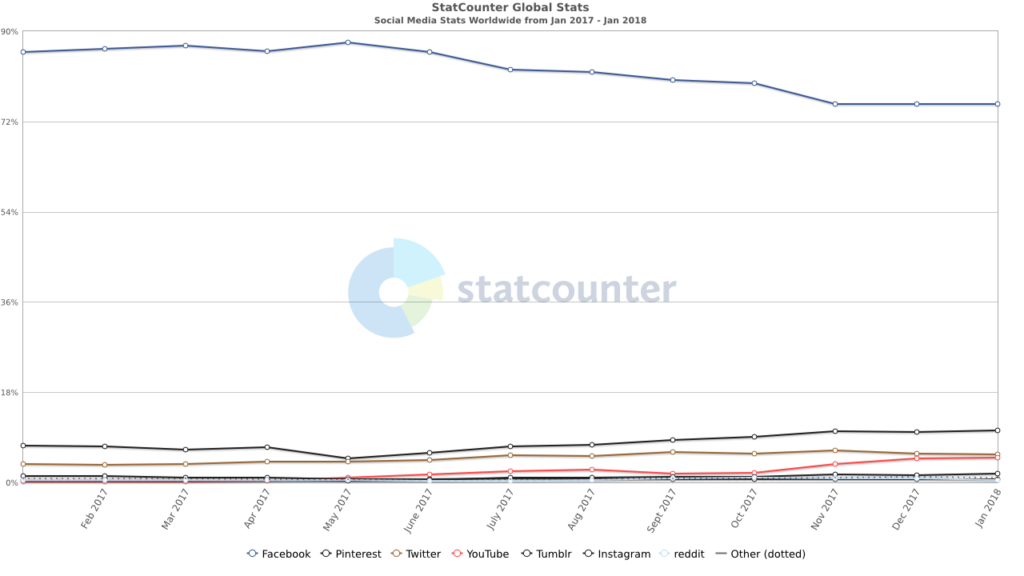 And even if you don’t agree with the latter part of my analysis, even at 75% market share Facebook is capable of monopolistic behavior. Let’s assume for a moment that it’s bad enough that we need to break up the company. Could it be done?

Our first problem is how we break up the company.

If we follow the regional approach, once more problems emerge. If we created one new company for each state and divided out people based on where they lived, we would inevitably separate family members from each other, and make it harder to keep up with your roommates after college. This would greatly degrade the quality of the service, making people leave and use it less.

On the other hand, if we created, say, seven corporations that spanned the whole country and had no geographic restrictions, and divvied out American users at random or by some function of keeping friend groups together, then we might end up in a situation where people start new accounts on the platforms they didn’t get moved to in order to keep up relations with people they know who got transferred to the other services. That’s not an optimal situation, either.

But, let’s imagine that we found a way to break Facebook up that makes sense, broken-up companies don’t seem to stay that way.

Consequently, even if we broke up Facebook, there’s precedent that indicates that solution isn’t permanent.

Okay, so let’s pretend that we’ve confirmed Facebook is a monopoly and that we’ve discovered a good way to break the company up. Do the changes we’ve made improve the end-user experience?

You see, Facebook doesn’t make its money directly off of the people who create accounts on the platform. Instead, it sells access to its users to advertisers. Companies pay Facebook to have their content appear in your timeline, and since you’ve given Facebook a lot of information about yourself and what you like, then Facebook can charge a lot to target ads towards you.

Ultimately, you’re not the one that pays the bills at Facebook. It’s the advertisers that do that. Facebook can’t afford to care too much about your personal happiness or wellbeing as long as you keep using the platform, so it can serve up more ads to you. Even if you were so unhappy that you left, you’d have to take tens of millions of your closest friends to have any sort of impact on Facebook’s bottom line. If we ever want to see substantive change on Facebook, it would have to start with the companies that pay to advertise on Facebook. As they say, money talks.

If you liked this article, be sure to check out:
Good Medicine Makes Bad Neighbors
Tales from the Tax Code: The Double-Irish Arrangement
Is Facebook Dying?