Why Can’t we Stop the Flu?

Why Can’t we Stop the Flu?

Influenza is a jerk. Its primary method of spreading is human-to-human, meaning the best way to protect against it would be to board ourselves up in our homes, which we can’t do. The flu strikes all age levels but loves to attack the elderly and the young, and despite the fact that for many people it is a relatively minor illness, it kills hundreds from those two groups every year.

We have a vaccine, but there’s no guarantee it will work. The entire situation is reminiscent of a lesser-known Mary Shelly novel, The Last Man, in which the entire world, save one person, succumbs to a plague that doesn’t follow the normal methods of infection. It comes and goes with the seasons, killing the strong and the weak, the isolated and the social, and the healthy and the unhealthy with equal ferocity. It’s really a terrifying book.

While we can vaccinate away things like Malaria, Polio, and Chicken Pox, the flu remains an evasive target.

And when you ask why people are quick to answer that is because the virus mutates so much. Which is like asking how an engine works and being told that it sets gas on fire. It’s true, but we understand the process on any kind of meaningful level.

I started with the CDC’s website, and realized the website was written by someone who understands the topic very well, as they threw around words like “phylogenetic,” “hemagglutinin,” and “neuraminidase,” with not even a hint of a suspicion that the layperson might not be able to follow along.

Okay, we’ll start with a picture of the flu virus: 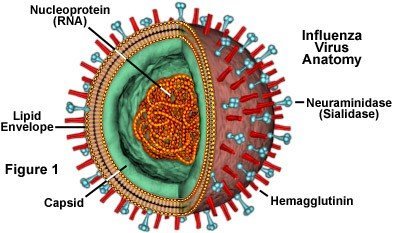 What is important here is those little red sticks on the surface of the virus, the hemagglutinin. The hemagglutinin allows the virus to connect to and infect your cells.

Here’s a close-up of the hemagglutinin (shown in blue): 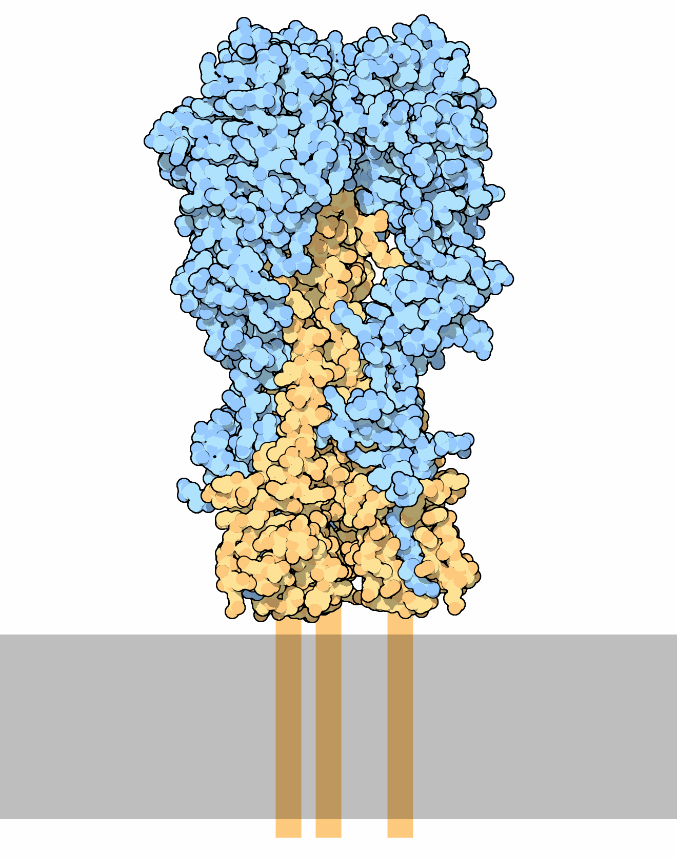 The first line of defense in your immune system is antibodies. They are built and specially-shaped to attach to foreign bacteria and viruses, and when they do they alert other kinds of cells to come kill the invader, or by preventing the virus/bacteria from attaching to your cells. They work against influenza by attaching to the hemagglutinin like so:

If a flu virus mutates in such a way that the areas highlighted in green in the above picture change shape, the pre-made antigens will not be able to bind to the hemagglutinin.

This is important because flu vaccines work by training your body to recognize flu viruses using weakened or dead viruses. Specifically, they are training your body to recognize the hemagglutinin, and the next time you are infected your body will remember the appropriate antigen to counter the specific hemagglutinin and rapidly produce it in response to the threat. If you don’t have antigens you need when you first get infected, the infection is going to be much worse, causing more symptoms and lasting longer, as your immune system has to start over from scratch.

In years where the flu vaccine has low efficiency, the people producing the vaccine guessed wrong as to which hemagglutinins would be most prominent in the coming flu season. Here’s a table compiled by the CDC showing yearly effectiveness:

Okay, so we’ve established what the mutations in a flu virus do, and why it makes them so dangerous. But how do the mutations happen?

However, the virus uses its own assembler when building the copies of the RNA for the new viruses inside your cells. This is called RNA-dependent RNA polymerase, and it’s not terribly accurate. In humans, mistakes occur at a rate of 1×10-10, or one in every ten billion base pairs. In flu viruses, mutations happen somewhere between 4.5×10-5 and 1.7×10-6. This means that, depending on the type of influenza, there’s between 4.5 mutations per every hundred-thousand base pairs and 1.7 in every million.

While these numbers are objectively small, they are orders of magnitude higher than that of human cells. And, flu viruses are capable of building 500-10,000 new copies of themselves each time they infect a cell. At the upper end of that range, on average, ten infected cells could result in as many as 4.5 new mutations! These mutations may not result in a new hemagglutinin structure that allows it to evade your immune system, but the numbers suggest that the virus is playing more for quantity than for quality, anyways. It only has to be right once, and it gets a lot of tries.

And finally, there’s the confusingly-named antigenic drift, which is not to be confused with antigenic shift, outlined above. Influenza viruses are capable of infecting various kinds of birds as well as pigs, in addition to humans. If one of those viruses that originally lived in a bird or pig manages to infect a human, that’s antigenic drift. The viruses that make the jump tend to be more contagious and cause worse symptoms, which is why we’ve had bird and swine flu pandemics in recent years.

Additionally, human viruses can make the jump to pigs or birds, swap RNA with the flu viruses those animals have, and then jump back to humans. Overall, the fact that so many species can be infected by the virus radically increases the rates at which it mutates and lowers our overall resistance by constantly adding new hemagglutinin structures to the mix.

Overall, the flu will never be eradicated unless new vaccines are developed that focus on different parts of the hemagglutinin, like the neck, instead of the head, which is currently-targeted and mutation-prone, or by targeting different surfaces on the surface of the virus. In the meantime, the best way to protect yourself is to get vaccinated and wash your hands frequently in flu season.

If you liked this article, be sure to check out:
How Rich are Today’s Rich?
Can the President Block You on Twitter?
How Many Backup Planes do Airlines Have?