The Plane is Cold and Another Story

The Plane is Cold and Another Story

Today I popped onto Reddit and found a pair of stories that I believe the media has woefully removed from their proper context.

Funny how despite the fact that I’ve warned the media about the dangers of decontextualizing their pieces they keep doing it.

First up is a story about Melania Trump:

As you can see from the picture, the title of the article was “Melania flew to Texas to visit immigrant children wearing a jacket that says ‘I really don’t care, do u?’”

The first line of the article is “First lady Melania Trump wore a green military jacket that says, “I really don’t care, do u?” on her surprise visit to Texas to visit immigrant children on Thursday.”

Let me set up a hypothetical for you:

I start the day wearing a suit. On the way to work, I spill coffee on it. I stop in at a dry cleaners, change into gym clothes, and leave the suit there to be cleaned.

At work, I participate in a business meeting in my gym clothes. After the workday ends, I return to the dry cleaners, get the newly-cleaned suit, put it back on and head home.

Reading comprehension question: did I wear a suit to the meeting?

I did not. I wore gym clothes.1

So, without any further framing, I’m going to show you a series of photos in chronological order from the article that the article linked on Reddit used as a source. 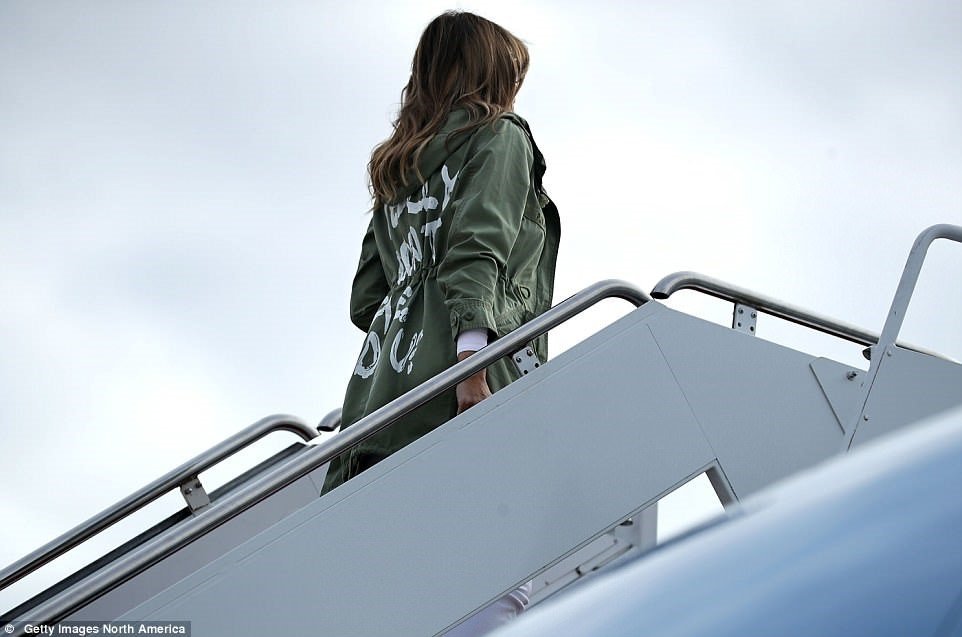 Here’s her getting off that same plane in Texas: 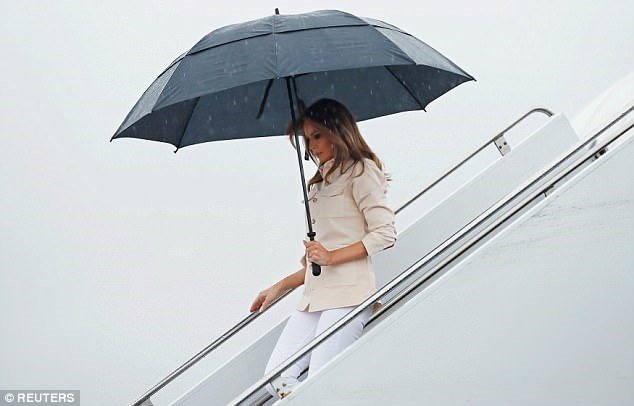 Here she is meeting with people: 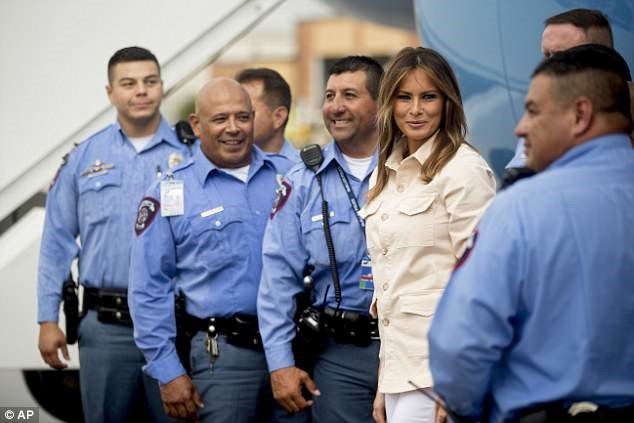 Here she is at the school: 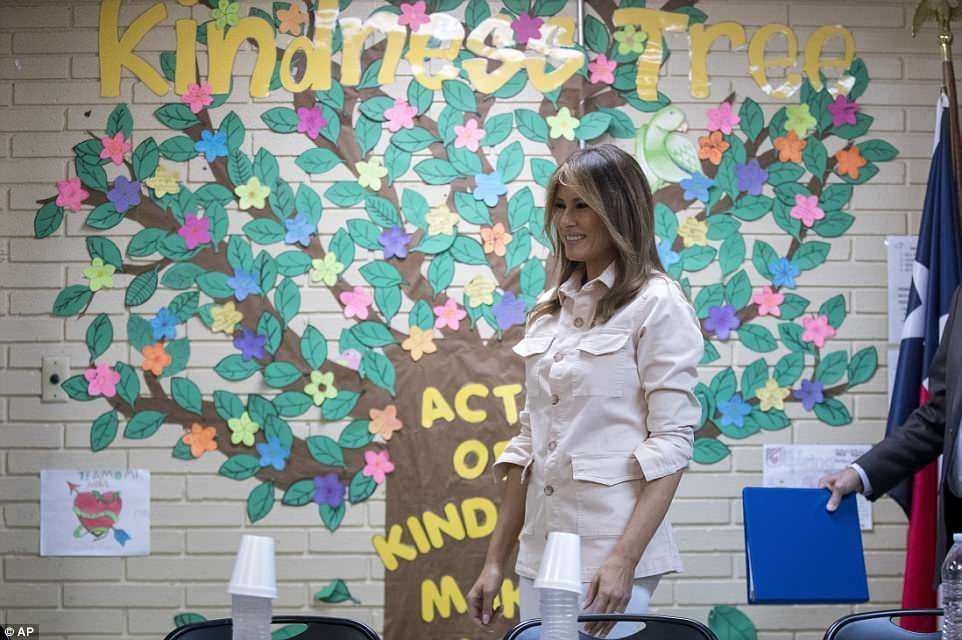 Here she is, getting back on the plane in Texas: 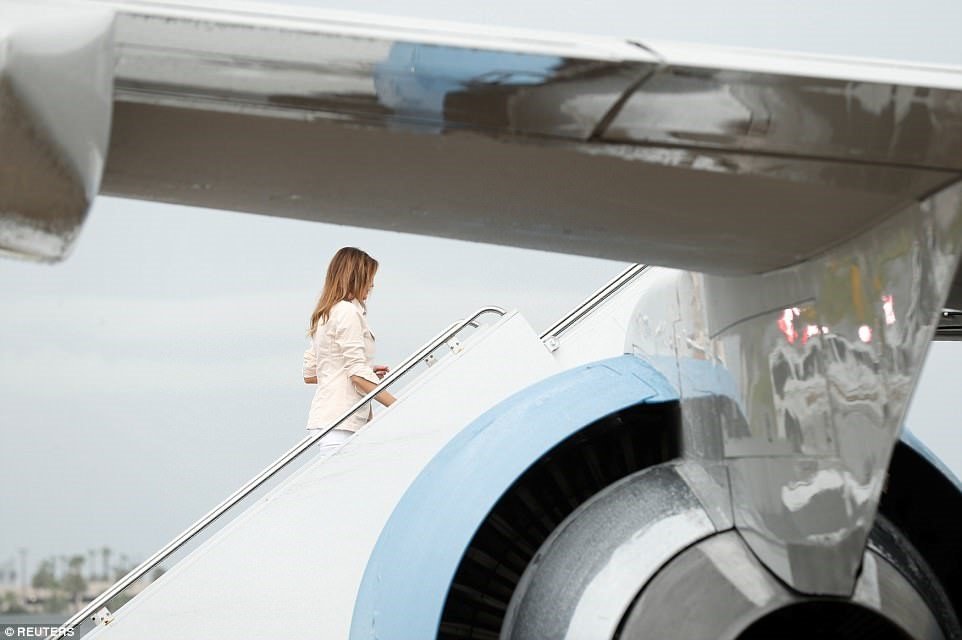 And here she is back in Washington D.C.: 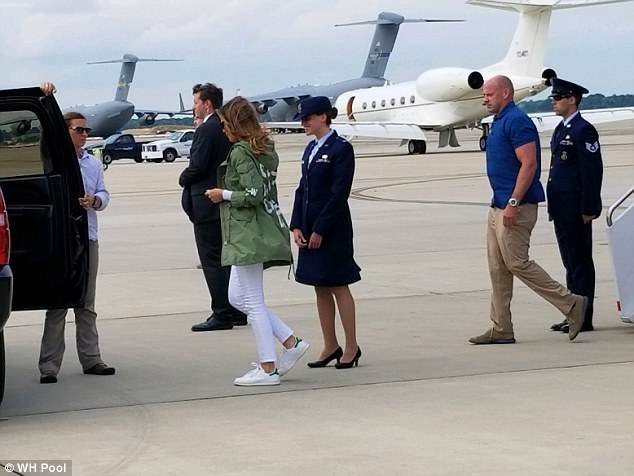 So, let’s ask ourselves the same question: Did Melania Trump wear that jacket to the visit with illegal immigrant children?

The clear answer is no, as evidenced by the fact that she isn’t actually wearing the jacket while meeting with anyone.

Now, you could say that she’s doing some kind of weird passive-aggressive political messaging with her clothing. You have no evidence for that, but an article with that claim made it to the top of Reddit, so I don’t feel bad about speculating here myself.

What if that plane is just really cold?

She arrives at the plane with a jacket on, takes it off before stepping to the Texas heat, and has it back on again when arriving at D.C.

If it’s a cold plane, then there’s no message attached to the jacket. She just needed something to wear to keep her warm.

Either way, I’m not saying that I think it was a particularly tasteful jacket, but it’s inappropriate to read the message people are reading into it because they have absolutely no evidence for it.

On another note entirely, another article with the title “Arrested for Not Carrying an ID on Way to High School, Young New Yorker Opts to Fight.”

Here’s the opening line from that article: “ Mariah Charles woke up on Tuesday faced with a difficult decision. Does she take a plea to a crime she didn’t commit or go to trial — face the two officers who slammed her to the ground, arresting her on her way to school — and risk losing.”

Why was she arrested?

Well, according to the title, it’s because she failed to show identification. We’ll get into the legality of that in a second.

First, I want you to take a look at this video of her arrest. Watch the first minute or so.

Did you notice what I noticed?

At about 30 seconds, the teen in question starts to walk past the officer, who had already stopped her and appeared to be talking to her.

He prevents her from moving past him. At 41 seconds she tries the same stunt, at which point the cop grabs her and arrests her. Notice that she heavily resists.

Trying to leave while the officers were trying to talk to her appears to be a violation of New York state law. Specifically, Penal Code Section 205.30. It’s a crime called “resisting arrest.”

As you can see in the video, she clearly tried to leave the scene. Further, she fought when they tried to cuff her. As far as I can tell, and I’m no legal expert, they have her dead to rights on this one.

The New York Civil Liberties Union writes, “Don’t bad-mouth a police officer or run away, even if you believe what is happening is unreasonable. That could lead to your arrest.”

Now, did she need to show ID?

According to the NYCLU, “In New York, you are not required to carry ID, and you don’t have to show ID to a police officer. If you are issued a summons or arrested, however, and you refuse to produce ID or tell officers who you are, the police may detain you until you can be positively identified.”

The video shows clearly that the officer stopped her. The officers suspected a crime in this instance, truancy, so it was a legal stop. She was detained, and she clearly tries to escape.

She wasn’t arrested because she didn’t have ID. That’s not illegal, and it doesn’t ultimately matter.

She was arrested because she tried to run away. She resisted arrest.

It will be interesting to see how her court case turns out.

Again, I’m no legal expert, but from where I’m sitting it appears to be pretty open and shut case.