The State of the Blog

The State of the Blog

I meant to do this post for yesterday, but somehow my day-counting got off and instead of posting my retrospective on my first month on the first day of my second month1 I’m instead posting it on the second day. So, that’s a missed opportunity.

It’s been a good month for us, and in saying that, I hope that it has been as good for you has it has been for me. I had the goal of publishing a blog post every weekday and was successful on 22 of 23 possible days. That’s a 95.6% success rate. I’m shooting for 100% in March.

One of the things that I’ve learned so far is that I have to have a productive weekend to be on track when Monday rolls around. I write every post on the day before it gets posted, but if I work hard on Friday, I don’t have to work at all on Saturday. If I put things off until Sunday, bad things happen.

I’ve also learned that 1,000 words is both a lot and nothing at all. It usually takes a couple of hours to do the research for my articles, and then 2-3 hours to sit down and write. If I was more disciplined, and I’m growing better at this, I could be done with the blog post by the time lunch rolls around, which frees up the rest of the day to be spent on other projects.

Speaking of other projects, I’ve been working on starting a company to do freelance writing work for nonprofits. It’s been eating up a lot of my time recently, but I’m finally getting to a point where I can see the finish line, even if it is still a great distance off.

Long-term, I’m not entirely sure what this means for my blog. If the company takes off, I’d necessarily spend more time on that because it would be what’s bringing income in. My hope is that I don’t have to scale the blog back, but that could be in the cards, one day.

But, in the present, I’ve gained a lot of clarity about why I do this blog, and I’ve come up with three major reasons.

Finally, I thought I would take a moment to show you some of the behind-the-scenes stuff. If you haven’t heard of Google Analytics, well, that’s not weird. However, if you build a lot of websites, or work on the backend for various people, and want to know how well things are working, and if people are able to find the various parts of your website, then Google Analytics a good tool for figuring out those sorts of things.

For instance, here’s a graph of the user count by day over the course of January:

There are three major spikes in the graph, each related to its own distinct event.

On January 1st, I hadn’t correctly filtered by own computer out of Google Analytics’ data, so the spike is me just checking everything repeatedly to make sure it’s working. Late on the 10th, I had a friend share a post on Facebook, which drew people to the site that day and the next.[And apparently, they forgot about it forever and never came back]. And then on the 22nd, I shared a post on my personal feed, which drove a bunch of people to the site over the next few days. Clearly, Social Media is a powerful tool. Not that anyone needed my confirmation on that.

And while it’s hard to see on the above graph, I do have some confidence that my userbase is slightly growing over time. I have slightly more daily readers than I had at the start, and sharing on social media, which I plan to do infrequently on my personal page, causes at least short-term gains. 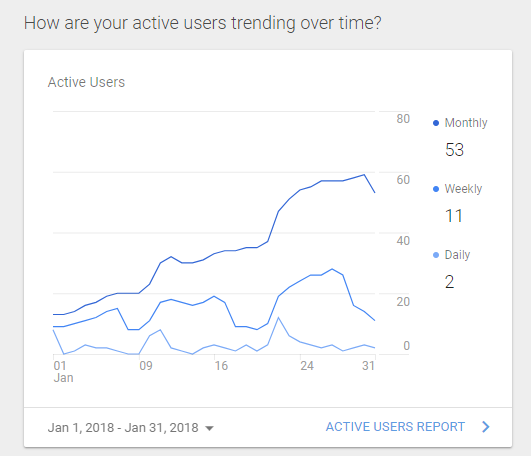 What I do find a little weird is that I get the number of views that I do with almost no comments. I was led to believe that the Internet was full of trolls, ready to unload their comments at the slightest provocation. But maybe that’s not the case. I tried to do some research to see if there was a standard percentage of viewers that leave a comment but came up short. If you come across any, please link them below in the comments section.2

Finally, I thought I’d leave you guys with a list of the top posts from January.

Thanks for checking out my blog in the first month of its existence, and I hope to be creating stuff that you enjoy long into the future.

Comments are now closed for this article.