How Rich are Today’s Rich?

How Rich are Today’s Rich?

You’ve probably heard the term “The Great Recession” used to describe the implosion of the housing bubble in 2007, which led to a worldwide financial crisis and years of economic shrinkage and stagnation. According to the U.S. government, it lasted from December of 2007 to June of 2009. Since then, you may have seen a bevy of articles reporting that the so-called recovery after the recession was not terribly equitable, with the richest Americans receiving the lion’s share of economic growth.

A graph from the New York Times sums this up 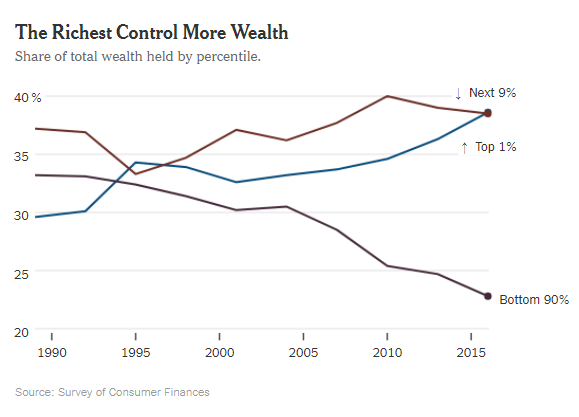 Tim Worstall at Forbes suggests that this is normal economic behavior. If we only look at the period after the recession, we miss out on an important economic data point. “The rich lose the most in the recession and then gain the most in the aftermath and recovery. That second simply being a result of the first.”

And while income isn’t the same thing as wealth, we could expect them to correlate. Take a look at this graph:

The top 10% are currently above historical lows, but well below historical highs, which is important to know when trying to understand these numbers in context.

Whether the current levels constitute a problem or not depends on a lot of factors, as well as your personal moral judgments of wealth. It’s beyond the scope of this article, but there’s a lot of stuff out there if you want to read up on the topic.

Instead, I want to talk about the times when wealth was much more concentrated in the hands of a few than it is now.

Our first stopping point is the Gilded Age, which lasted in America from the 1870s to around 1900. Time reports that in 1897, 4,000 families in the United States had roughly as much wealth as the other 11.6 million families. After some quick math, we can figure out that means that about .034% of the population held half the wealth in America.

This is incredibly hard to compare to the modern day. For one, they had around 30% more wealth than today’s 1% had. But, furthermore, there’s less of them. This is the .034% we’re talking about. There are 29 times more people in the 1% than there are in the .034%.

In the Gilded Age, those 4,000 families held, on average, .000125% of the wealth, or about 3.38 times as much, on average, as the 1% do today. And they got to keep more of their money, as the modern income tax was not introduced until 1913.  In fact, multiple figures from this era make the list of top earners of all time, when currency is adjusted for inflation.

John D. Rockefeller is estimated to have been worth $336 billion, while Andrew Carnegie was $310 billion at his height, making them second and third on the list, respectively. Cornelius Vanderbilt and his son, William Henry Vanderbilt were worth between $52 and $239 billion in their lifetimes, which lasted into the early years of this age.

And, now we get on to the slouches, who were worth less than $100 billion. Frederick Weyerhaeuser was a timber mogul, worth $79.4 billion at his peak, and Jay Gould, railroader, was worth $71.2 billion at his peak. Marshall Field was worth an estimated $66.1 billion, which he built on the back of a retail and wholesale empire.

In fact, the top 3 richest Americans of all time come from the Gilded Age, with Bill Gates unceremoniously bumped down to number 4 on the list.1

And, that’s in America, where’s there’s no royalty to be found. Mansa Musa, emperor of the Mali Empire, is estimated to have been worth $400 billion. Nicholas II, last Tsar of Russia was worth around $300 billion, while Mir Osman Ali Khan, ruler of the state of Hyderabad in India built a $230 billion fortune largely off of royalties from diamond mines in his kingdom. William the Conqueror, who conquered England, was worth around $229.5 billion at the time of his death, and Muammar Gaddafi is alleged to have been worth around $200 billion.

It’s worth pointing out that the wealth of these rulers would have represented a significant portion of the wealth of the countries they ruled. If Gaddafi’s estimate is correct, then his net worth was equivalent to around .5% of the GDP of Libya in the year of his death. That’s super significant. One person, 1/200th of the wealth. This makes him about 4,000 times as wealthy, in terms of percentage of wealth in the country, as one of those top 4,000 families in the gilded age.

Maybe wealth inequality is a problem. Having money, in and of itself doesn’t seem wrong, but it does seem to matter how you got it and what you do with it.

It’s important to understand current trends in light of historical context, though. We’re nowhere near Gaddafi levels, and we’re still pretty far away from where we were in the Gilded Age.

The problem doesn’t seem to be that the Rich are getting richer. Caring about that is just your envy talking. What does matter is that we’re not all quickly becoming better off, something that seems to have happened at points in the not-too-far-off past, and the rich are a convenient scapegoat for everyone else’s frustrations.

We’re better off on average than the average citizen of just about any other country in just about any other time in the history of the world, and that’s not something that radical income redistribution will change, and if history has anything to say about it, it will probably make things worse.