If you have your ear to the ground, you might hear the whispers that suggest Facebook is dying. To be honest, I might welcome those. I never really liked Facebook, because it became quickly apparent that it didn’t live up to the promises it seemed to be making.

Ostensibly a platform to help you connect with your friends, early on it struck me as shallow and somewhat narcissistic. Not that it didn’t have any value at all, but it was never something that overly appealed to me. Over the years, it’s been interesting to watch it evolve, becoming less about what people are doing, and more about what people think and what businesses are trying to sell you.

It’s interesting to watch people turn on the platform for reasons that I would never have predicted. Former employees of the company are increasingly making the case that the platform is bad for you and was designed that way. Facebook’s favorability ratings are plunging, and while they’re not yet in the negative, they’re headed that way. DeleteFacebook has become a trending term in response to revelations about Facebook’s abuse of personal information, even though there’s little evidence that is happening en masse at this point.

Others are upset at the company because it was used to spread Russian-sponsored propaganda. People are spending less time on the platform, which CEO Mark Zuckerberg says is fine, but might be a huge problem. As he revealed in the linked NPR article, the “5 percent decline in usage” across the last quarter of 2017, “works out to roughly 50 million hours per day that people are not spending on Facebook.”

So, it’s only fair to ask if Facebook is dying.

Of course, we have to put everything in context. 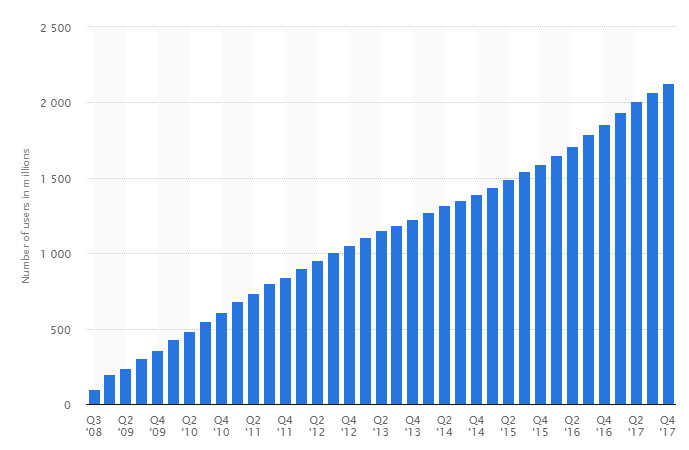 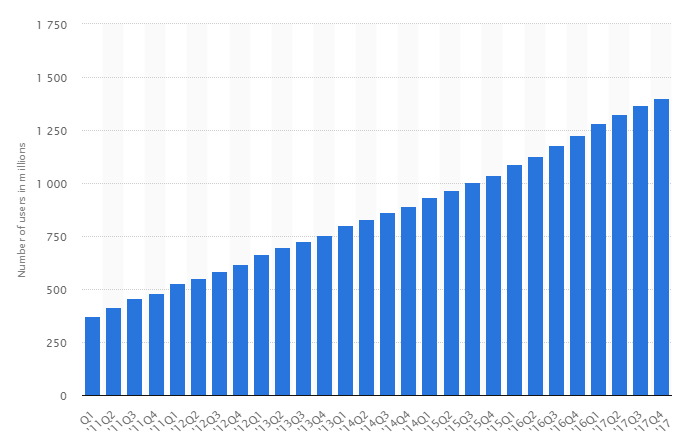 So, predictions of Facebook’s death in the past have been overblown. If Facebook is dying, we will have to see even stronger signs than those proposed in the past.

And, despite these massive numbers, they still have growth potential. As of December of last year, 54.4% of people on the planet had Internet access. That works out to more than 4.1 billion people, around 2 billion of whom are not on Facebook.

Which means there’s no reason the company couldn’t continue growing.

On the other hand, a lot of people are pointing to the fact that Facebook’s stock has declined more than 17 percent since March 16, as a result of various scandals and Zuckerberg’s agreement to testify before Congress. 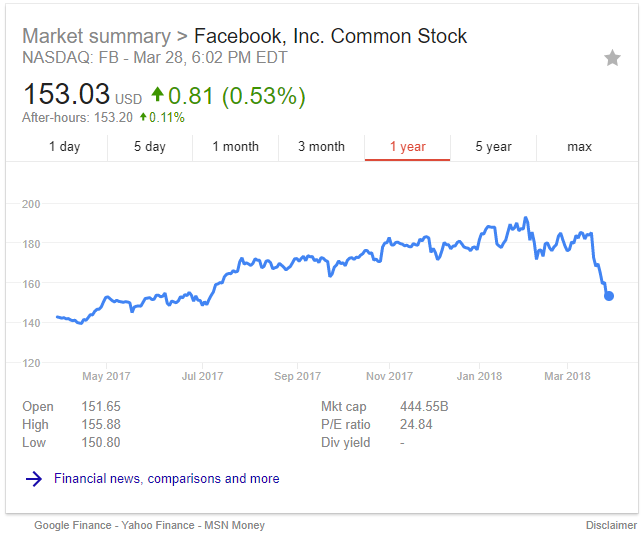 However, that doesn’t mean that the company is in trouble just yet.

While Facebook’s first-quarter results should soon be available, the most recent data we have is their fourth quarter and annual numbers for last year.

And what a year it was.

According to their annual report, Facebook brought in more than $40 billion in revenue, up from around $28 billion the year before. The company has around $8 billion in cash on hand and claims more than $84 billion in assets. Its net income for the year was almost $16 billion dollars, up from the $10 billion it profited in 2016.

So, right now, Facebook is in a good place financially. It will be interesting to see how it does in the future, especially if the DeleteFacebook trend turns out to have any teeth to it.1

On the other hand, while Facebook is Facebook’s core business, Facebook actually owns around 67 other businesses. While most of these acquisitions seem to be targeted at buying out rivals and thus eliminating them, acquiring technical talent, patents, or ideas for the improvement of Facebook itself, or acquiring companies that would help it monetize itself, there are three companies it owns that just might turn a profit of their own.

Instagram is the current gem of the three, adding 100 million new users and half a million advertisers approximately every six months. That’s a blazingly fast growth rate that could compensate for slowdowns in Facebook’s growth in the coming years. According to the Motley Fool, “Instagram alone could easily account for around 20% of Facebook’s total revenue growth based on estimates of $1.8 billion in revenue last year.”

Funnily enough, after Facebook’s acquisition of Whatsapp, the app went from costing $1 annually to use, to free. And, while the app remains unmonetized, a Forbes comparison of the app to similar apps Line and WeChat suggests that monetizing Whatsapp could bring in anywhere from 5.2 to 15.6 billion annually, without any further user growth. (Whatsapp currently boasts 1.3 billion users.)

Oculus, which was acquired for $2 billion, hasn’t provided much return on investment so far for Facebook. Zuckerberg himself confirmed that “VR sales ‘won’t be profitable for quite a while.’”  That being said, some analysts project that the Virtual Reality market could be worth as much as $26.9 billion by 2022. Since there are only three major players in the market, Sony, HTC, and Facebook-owned Oculus, Facebook stands to profit majorly in the future if it can gain a significant market share.

The other upside to Oculus is that its revenue isn’t derived from advertising, like Facebook and Instagram, but rather through sales of headsets, operating systems licenses (to other companies making headsets), and probably a percentage of revenue of games and apps sold for use on the devices. Consequently, different market forces are at play, making Facebook as a whole more economically diverse and stable.

So, really, when many people are asking if Facebook is dying, they’re asking only part of the question.

When you’re referring to Facebook, the product that everyone upset with, then maybe. The first quarter financial results that should be posted this April should be telling in that regard.

But, when we’re talking about Facebook, the company that owns other companies, we’re really talking about a company with growth on multiple platforms, and a lot of untapped potential in both unmonetized apps and industries that should grow dramatically in the future.

Maybe now’s not such a bad time to buy Facebook stock.