I saw a really great tweet the other day that went something like this: It’s funny that diplomats exist to get kicked out of a country when something goes wrong.1

A humorous take on the expulsion of dozens of diplomats by various countries in response to the alleged poisoning by Russia of former Russian spy Sergei Skripal in the United Kingdom. Skripal remains in critical condition in the UK.2

The BBC published an interesting graphic showing how many diplomats various countries have expelled in response to the attack:

The giant number of Russian diplomats expelled from the United States caught my eye. Why are there so many here? Why is it that so many can be kicked out at once? And what is it that they do, anyway?

To be honest, I kind of just expected to find a number showing how many diplomats were stationed here. It seemed like counting the diplomats would have already been done by the State Department and published somewhere on its website in a handy “Frequently Asked Questions” infographic.

If they’ve done it, they’ve hidden it well. I can’t find it published anywhere.

However, I was able to find this handy document, “Diplomatic List,” published by the State Department, which lists every diplomat in the U.S. and their spouse, if they have one. The most updated version I could find was the “Spring 2016” edition. And so, I began to count.

By the way, if we’re discussing diplomats, we have to talk about the word plenipotentiary. It is defined by dictionary.com as “a person, especially a diplomatic agent, invested with full power or authority to transact business on behalf of another” In this case, it means they’re the top dog, authorized to conduct business on behalf of their home country. Per the Congress of Vienna of 1815, the full title is “Ambassador Extraordinary and Plenipotentiary.”

So, after about an hour and a half of counting, which you experienced in the span of a single paragraph, I came up with the total number of diplomats in the United States as of Spring, 2016: 3568. That’s a lot!

But, we should talk about Russia. Looking at these numbers suggests that expelling 60 diplomats is a big deal. That’s half their total delegation.

So, why does it matter?

Well, that depends on what diplomats actually do.

According to the “Discover Diplomacy” section of the state department website, there are six main types of diplomats:

On the face of things, it seems like expelling diplomats will decrease a country’s ability to advance its own interests and that of its citizens within the host country. It will also be harder for American citizens to get Russian visas.

But, there’s one more thing that embassies are known for: spying.

Think back to spy stories you’ve seen or read about from the Cold War. Where did spies run when their cover was blown: the embassy. Sometimes whole operations were run out of embassies, too.

So, it’s important to note from where the Russian diplomats were expelled.

According to USA Today, “[t]he government closed down the Russian consulate in Seattle because it’s near a submarine base and the Boeing aircraft manufacturer,” which are two places where secret technology is developed and operated. Furthermore, 12 of the 60 that were expelled operated out of the Russian mission to the United Nations, which was known for the “Russian intelligence operations” that were run through it.

Dr. Angela Stent3, in an interview with National Public Radio, made an even stronger statement, saying the 60 individuals that were expelled “were presumably chosen because . . . they are in fact undeclared spies doing espionage in the United States . . . We do know that Russian espionage activities in the United States have picked up in the last few years. And they are now said to be at least at if not above the levels that they were during the Cold War.”

While I don’t know that I would go as far as to suggest that all 60 of the expelled diplomats were spies, it would make sense that the US expelled all or many of the Russian spies it was aware of at this time.

First, it shows solidarity with Great Britain, where an ex-Russian spy was poisoned by what is presumably a current Russian spy.

Second, it sends a chilling message to Russia, telling the country that the US knows which of their diplomats were spies, and is willing to kick them out of the country in order to prevent future attacks on its soil.

Diplomacy at its best, ladies and gentleman. 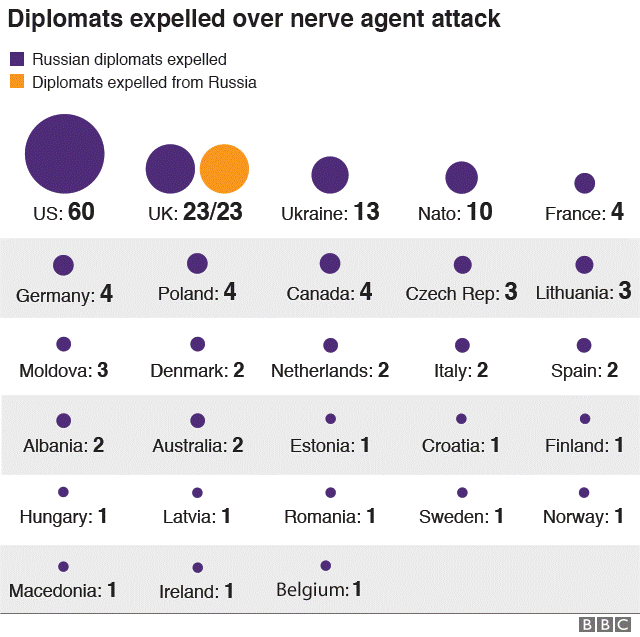