Why are There So Many Communist Dictators?

Why are There So Many Communist Dictators?

Unless you live under a rock, and no one in our glorious Socialist-Democratic-People’s Worker’s Republic lives under a rock, you’ve heard that that vile villain, Donald Trump, leader of that great oppressive power, the so-called United States of America, will be meeting with the glorious leader, Kim Jong-un. 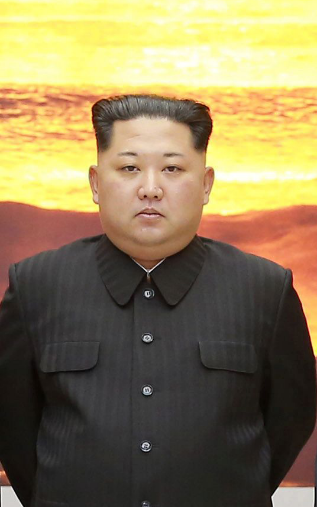 Here’s a picture of his greatness, standing in front of the sun:

So, I just have one question. From one good socialist worker to another, why is it that so many communist paradises end up with a man at the top, much like a dictator, who rules for much of his life? Not that he is a dictator, of course, I would never stoop so low, but just looking back at history at men like Joseph Stalin, Mao Zedong, Kim Jong-un, and as of late, it appears that Xi Jinping is seizing power in China.

In order to answer this question, we’re going to have to dive into our linen closet . . . er, Lenin Closet.

That’s right, we get to take a trip all the way back to the theories of Vladimir Lenin.

Maybe you’ve forgotten who he is, good comrade, in which case I’ll give you a quick history lesson. Vladimir Lenin was a prominent Russian communist political theorist who was instrumental in the rise of the Soviet Union and its first dictator. After his death, his ideas were used by his rival, Joseph Stalin, in forming what would become the standard ideology of the Soviet Union, Marxism-Leninism.

So, while I was trying to find out why our glorious worker’s republics kept ending up with dictators, I repeatedly came across the idea of a “Revolutionary Vanguard,” as a possible reason why. Further research revealed that an early explanation of the Revolutionary Vanguard was laid out in Lenin’s 1902 work, What is to be Done?

The good workers over at Marxists.org have a translation of What is to be Done? which can be found here.2 The modern introduction states that Lenin “conceived of the vanguard as a highly centralized body organized around a core of experienced professional revolutionaries,” necessary because the “proletariat of its own [accord] can achieve only ‘trade-union consciousness.’” This means that, in defiance of Marx’s predictions, the working class in most of the world tried to solve their problems by working within the system instead of resorting to revolution.

In the body of the work itself, Lenin borrows from Freidrich Engels in suggesting that there are “not two forms of the great struggle of Social Democracy (political and economic) . . . but three, placing the theoretical on a par with the first two.”3 The point Lenin is making is that while most workers tend to understand that they are in a political and economic struggle, they’re not sure of the best way to liberate themselves from the system because they have not yet advanced sufficiently in their knowledge of Marxism.4

The problem of workers being uneducated in Marxist theory is filled by Lenin with the Revolutionary Vanguard. To put it in his own words, the “role of the vanguard fighter can be fulfilled only by a party that is guided by the most advanced theory.”5 Membership in this group is restricted by its function. While it could theoretically be open to whoever could qualify, that’s not super likely to happen, as whoever’s in charge would set what the most advanced theory was. If you disagree, you’re probably out of luck.

Later, Lenin writes that “it is not enough to call ourselves the ‘vanguard’ . . . we must act in such a way that all the other contingents recognize and are obliged to admit that we are marching in the vanguard.”6. Subtextually, this means that the vanguard must achieve something close to uniformity in its ranks. Dissent, especially open dissent, would weaken the image portrayed to outsiders.

Lenin later states that “only a party that will organize really nation–wide exposures can become the vanguard of the revolutionary forces.”7 Again, Lenin doesn’t seem to think that the Revolutionary Vanguard would be exclusive, as he believes that in order to be effective it must be able to attract followers from across the nation. And for it to work, it must. He immediately follows this phrase with the cast that “[t]he overwhelming majority of the non-working-class exposers . . . are sober politicians and level-headed men . . . [who] know perfectly well how dangerous it is to ‘complain’ even against a minor official, let alone against the ‘omnipotent’ Russian Government. And they will come to us8 with their complaints only when they see that these complaints can really have [an] effect and that we represent a political force.9

This plan, in all its ambitiousness, requires a great amount of coordination in order to work, especially since membership in the Revolutionary Vanguard is not based on function (being able to address complaints), but on ideological purity.

And this, dear comrade, is a big reason why we see so many dictators in charge of communistic regimes. In order to create and maintain ideological purity among the Revolutionary Vanguard, you’ll need some sort of group or committee that decides exactly what that ideology is, like, for instance, a politburo.

And, if you’ve ever worked on a committee, you’ll know that they can be inefficient. This can be helped along by appointing someone to run the committee, who isn’t officially above the other members, but in practice, is. We might even call him a “general secretary.”

And who knows, he might consolidate his power and start running the country by himself, enforcing his version of ideological purity on the politburo even as the politburo enforces it on the rest of the country.

Then again, nothing ever goes wrong in a communist paradise.