If I had to choose two words to describe The Washington Post’s publication of Shashi Tharoor’s “In Winston Churchill, Hollywood rewards a mass murderer,” those are the two I’d choose.

If you look at my piece from yesterday you’ll see that most of the facts in it fall into two categories, being either misleading or outright false. There are times when he misquotes the sources he uses, and there are other times when he quotes correctly, but the sources themselves contain inaccurate information.

Perhaps we need a refresher course on truth and honesty in journalism.

I busted out on old textbook from the one journalism class I took in college, Telling the Story1. Just 11 pages into the book, there is a quote from Bob Woodward describing “[t]he goal toward which most journalists strive” as stories which are “the best obtainable version of the truth.”

On page 12 of the book, the authors claim that “Accuracy is the most important characteristic of any story . . .[e]very name must be spelled correctly; every quote must be just what was said . . . [a]nd that still isn’t good enough. You can get the details right and still mislead unless you are accurate with context, too.”

The Associated Press Stylebook, a generally well-regarded handbook within the industry writes that you should “[n]ever alter quotations even to correct minor grammatical errors” and wants to remind you that “you can misquote someone by giving a startling remark without its modifying passage or qualifiers.”2

Likewise, the Center for News Literacy at Stony Brook University writes that, “[u]nlike opinion journalism, which emphasizes evidence-based conclusions, mere assertion is a cluster of assumptions in search of validation. Belief and Emotion trumps evidence in this sphere.”

Shashi Tharoor’s article fails just about every rule that I’ve laid out above. He sometimes misquotes, at other times gives partial quotes, and frequently decontextualizes them. His evidence is weak, something that I noticed after checking his first linked source, which is making a case opposite of the one Tharoor presents. And, the quote which I got from the Center for News Literacy seems to accurately describe the article: “a cluster of assumptions in search of validation.”

So, what’s the danger? Why should we even care?

The thing I fear the most is that this article will be the only exposure that people get to these ideas. I’m worried that the inaccuracies and falsehoods contained within will stick with them. And, while you could argue that’s an unlikely scenario, I can prove that it’s not. The Washington Post promoted this article on Facebook, and some of the comments are quite revealing: 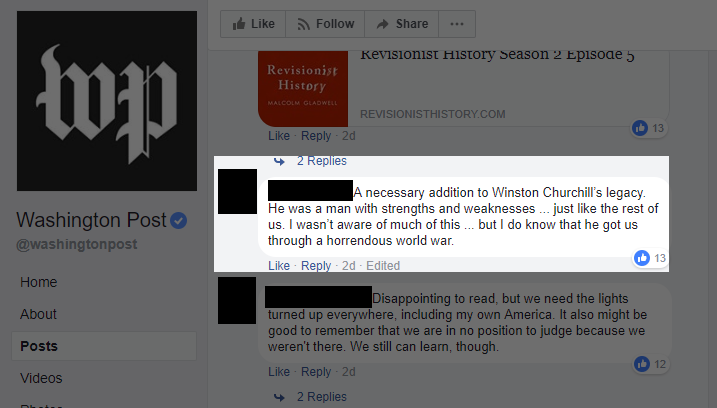 “I wasn’t aware of most of this,” says a commenter.

Of course, you weren’t! Much of it isn’t true!

I guess I just don’t want people misled or outright lied to by newspapers.

You see, the article in question is an opinion piece.

Opinion pieces aren’t so much about telling you the facts, though they still hold an obligation to be accurate, but they do allow for a non-neutral presentation of material.

And The Post does a decent job of cluing you in to the fact that this is an opinion piece. It says so at the top of the page, above the title, and it is clearly labeled as such on Facebook.

But, in content, it has few of the distinguishing factors within the body that would clearly label it as an opinion piece. The author never refers to himself, nor offers the idea that he is expressing an opinion at any point. Instead, the piece reads, in my opinion, like a history article, full of “facts” and quotes.

According to The Washington Post, roughly 6 in 10 people only read the headlines of articles. And, “In Winston Churchill, Hollywood rewards a mass murderer” is quite the clunker. For one, as I said yesterday, it doesn’t make any sense. For two, the author fails to prove the claim in the article. This is bad all around.

People aren’t informed about this topic, and this article isn’t helping them any.

According to the Center for News Literacy, opinion journalism works best when the reader is “well-informed,” “open-minded,” and “active, not passive.” Opinion journalism exists to help people form nuanced opinions on topics about which they already know something.

Tharoor’s piece does the exact opposite. It takes a topic about which most people know very little and tells them what to think about it. It also has a title that is ‘clickbaity’ and likely to make people closed-minded. And it’s a topic that no one can do anything about. That’s a very dangerous combination.

The question remains as to whether news sources have any sort of obligation to make sure that their opinion pieces are factually-accurate. And I think that they do.

I’m not saying that I’m unwilling to forgive a group that makes a small mistake and corrects it.

But when you’re looking at an article like Tharoor’s, which is filled to the brim with issues, you have to wonder, did an editor ever look at this? How could you publish a piece as misleading as this one?

I guess it would just be kind of nice to be able to trust some sources, especially the ones that grew out of legacy media. Or maybe our teachers will forever be correct when they said that you can’t trust what you read on the Internet.