Sometimes in life, I stumble across something about which I have no previous knowledge.

That happened when I recently read a Vice article on the subject of exorcism, about which I know little.

That being said, I find this article fascinating, as it details the lives of those whose day-to-day lives aren’t defined by spreadsheets, WordPress, baseball, and tax returns, but by things, spirits, which can’t be directly observed. However, if you take these people at their word, their effects certainly can be felt.

Something that leaped off the page while I was reading was the claim that “there are 500,000 alleged cases of demonic possession or activity in Italy annually.”

That probably sounds like a lot to you, because it is.

There were 177,031 car crashes in Italy that resulted in injury or death, so demonic possession is 3.6 times as common as a bad car accident.

464,000 babies were born in 2017 in Italy, meaning that more people were possessed by demons than gave birth. That means that ever since 2015, there have been more demonic possessions than births in Italy.

Italy’s population is declining, and the rate of demonic possession is on the rise. Since there is a shortage of Catholic Priests to drive out the 1370 demonic possessions that are reported every day, it stands to reason that Italy will one day be exclusively inhabited by those who are demon possessed.

Given this new information, I’m downgrading Italy from a “hold” to a “sell” stock.

According to this source, there are about 33,000 Catholic priests in Italy.

If we estimate that one priest can do two exorcisms per day, one in the morning and one in the afternoon, you’ll only need 685 trained priests spread roughly evenly across the country to tackle the daily need for exorcisms.

On the other hand, those priests will probably want the weekends off so well need to bump the number of priests by 2/7ths in order to make sure that they can have time off and that the demon problem is contained.

Which says to me that there shouldn’t be much of a shortage of people qualified to expel demons.

On the other hand, it’s possible that the Catholic Church doesn’t offer hazard pay for expelling demons. It wouldn’t be the first time an organization, even one as large as the Catholic Church, violated the Geneva Convention on Paranormal Protection of 1827. It’s important to make sure that your organization is in compliance with all laws concerning supernatural powers, but in this instance, making sure you offer the hazard pay is a great way to attract new priests into the fold.

Of course, it could be a logistical problem.

A few centuries pass, and you go from being a lean, adaptable house church to one of the largest institutions in the world. That’s not a change that happens with a lot of growth in your overhead and bureaucracy.

One day, you’re the Pope, and the organizational challenges of running a multimillion-dollar religious group have completely overwhelmed you, and important stuff, like expelling demons, has fallen completely to the wayside.

I’ve been working on a suite of software to simplify and expedite the demon-expulsion process so that you can spend more time on other important tasks.

Exorschedule is an all-purpose scheduler for exorcisms, making sure that you can get your exorcists where they need to be, on time, and with a minimum of hassle.

Exorcel is a spreadsheet enabling you to track your exorcism-related expenses. Knowing how much you’re spending on each part of a program will allow you to cut unproductive costs and save money otherwise lost to inefficiency.

Exorlogistics is a program designed with the complex exorcism-as-a-service business of the future in mind. Make sure you’re always stocked up on Holy Water and compare your success against that of other organizations. Are the Wiccans or the Methodists outperforming you? Exorlogistics will help your business be at its best!

Exegesis is designed for those moments when you need to explain why driving out demons is worthwhile.

Finally, you need to make sure that the public is warned about this very severe health crisis. Great Britain had some great public warning posters during World War II. Maybe you could use something along those lines:

Or, maybe that’s just too British. Let’s make it a little more Italian: 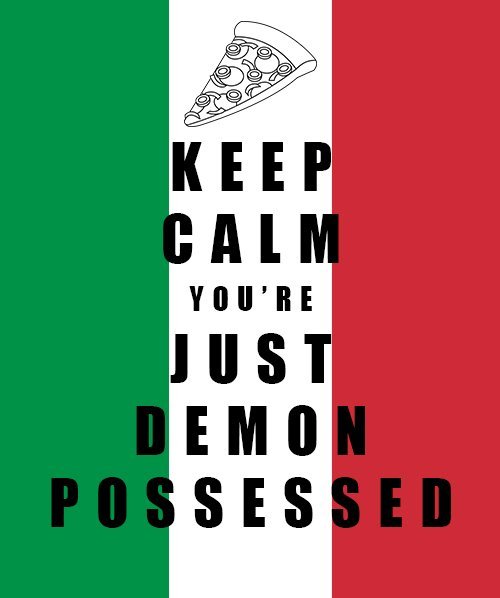 There. That’s much better.

Finally, we’re going to have to look beyond the Catholic Church for relief from demon possession in Italy.

Half a million possessed people?

That’s a health crisis right there.

Time to open up free clinics with on-staff exorcists, that also give out wards, incense, and free literature designed to help people protect themselves from demons in the first place.

And, you’ll need to move fast before the Demon’s rights movement gets off the ground.

It’s only a matter of time before you’re surrounded by people with placards that read “Possession is Just a State of Being” and “Demons are People, Too.”

Is it too late for Italy?

If the Catholic Church and the state can step up, maybe this crisis can be managed, or perhaps, brought under control.

Other countries will be watching, even as they close their borders to Italian traffic, in fear of being overrun with demons.

Only time will tell.