The problem is, it might not be there when I arrive.

And no, I’m not talking about it sliding into the sea as the result of an earthquake or some other natural disaster, of which California seems to have more than its fair share.

A proposal to split California into three different States has gained enough signatures, more than 600,000 of the 365,880 required to force a vote on the issue at the polls in November. The signatures must be reviewed to uphold authenticity, but if they pass, then the issue will be on the ballot.

That doesn’t mean that California could be three states as soon as November 6, as it would also need to be approved by the California congress, and perhaps also the United States Congress.

Maybe, but probably not.

A recent poll conducted by Ballotpedia found that 17% of people were in support of the change, with 10% undecided and a whopping 72% opposed.

I’m not sure how much value to put in that poll. I both suspect that it’s accurate and that the majority of respondents haven’t given much thought, or even been exposed, to the pros and cons of staying united or splitting up. Perhaps if this proposal makes the ballot, people will become more informed.

In theory, I’d be for splitting up the state. It would bring the reigns of government closer to home, which is something I’m in favor of most of the time, and especially when it makes sense.

Californians have “among the highest taxes in the nation,” ranked 44th in U.S. News’s ranking of Pre-K through 12th-grade educations by state, and faces severe water shortages. That’s not even to mention the drug crises that have seized the coastal cities.

Would splitting up the state provide solutions to these problems?

Not on its own.

Any changes or even improvements that took place would happen because the new states are freed up to try things that the state as a whole doesn’t have the budget, political will, or general agreement to put into practice.

But, taking a state of nearly 40 million people, and chopping it into three states of between 12 and 14 million would be sure to have some sort of impact. For starters, each state has roughly one-third the population, meaning that each person’s vote is roughly three times as valuable. Which isn’t a bad deal at all.

Creating new states removes a lot of the baggage from the old. New elections would be held and new state constitutions would be written. This proposal creates an excellent opportunity for a fresh start, but the voters would have to make good use of it. Voting the same way they did before would lead to the same kinds of results.

Now, I’ve come across an interesting objection to this proposal. I saw it first in an article posted by the Fox affiliate in Denver, of all places. Here’s what they reported about Cal 3:

“Constitutional lawyer and professor Jonathan Turley told CNN that congressional approval is not impossible, but not likely to happen, as Democrats could feel they have too much to lose.

Very interesting, to say the least.

Is that fear justified? Would Republicans do better in the three smaller states?

Unless you crunch the numbers, which I did.

Here’s a map of California showing the election results from the 2016 Presidential Election, sourced from Politico: 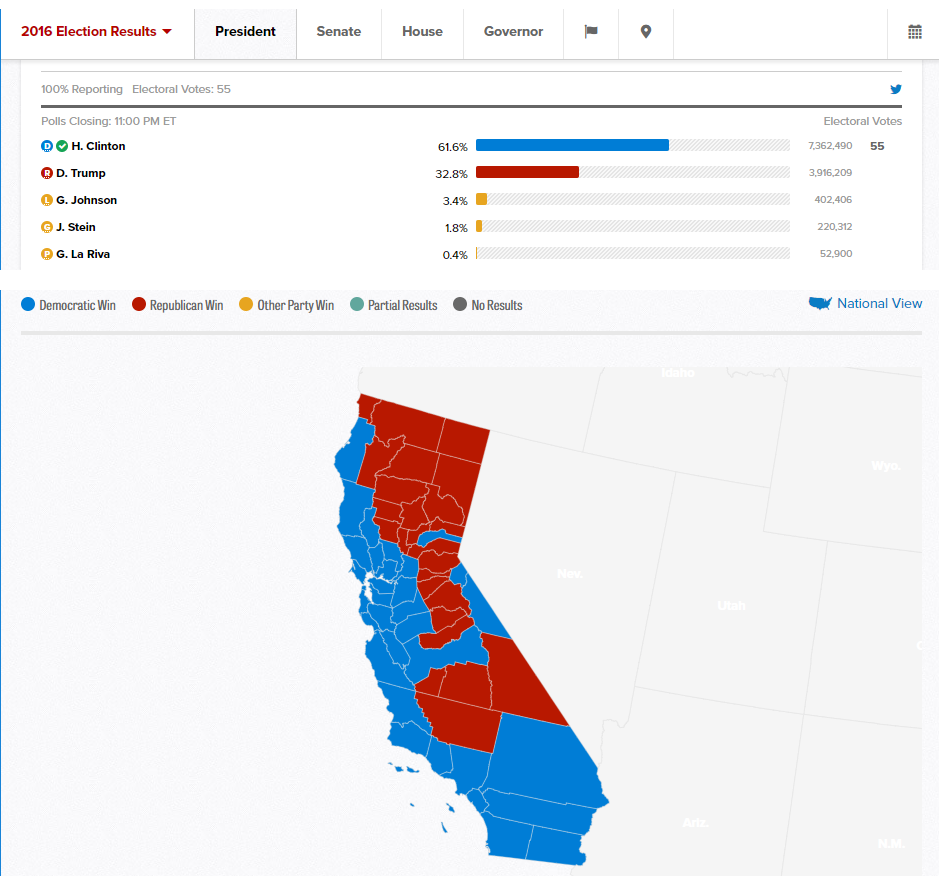 If you’re interested in the role California played in the 2016 election, and its relationship with the popular vote, check out this article.

Here’s that same map, split up into the three newly proposed states: 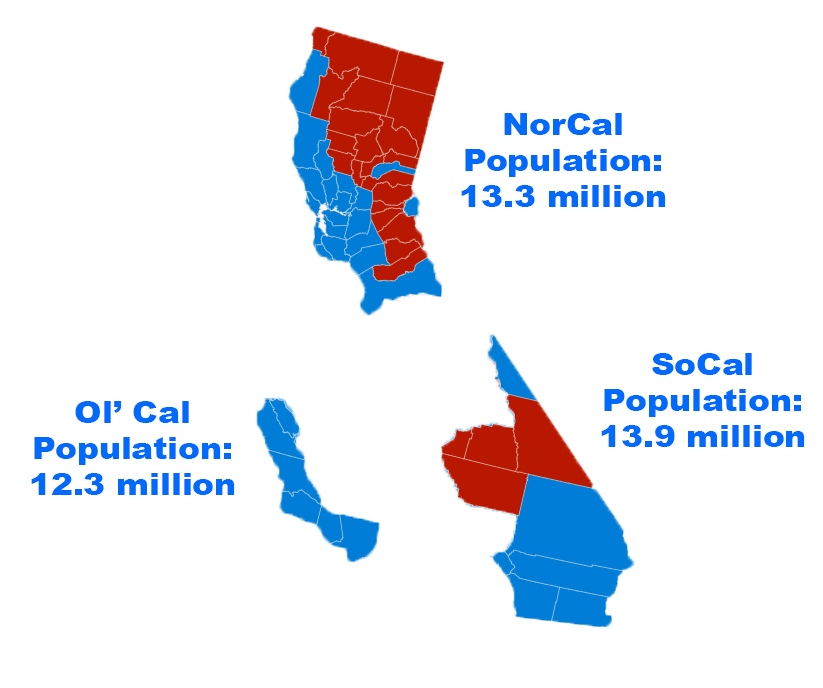 Just looking at the map, you can see why some Democrats might be nervous. That’s a lot of red in NorCal and SoCal.1 But, is their concern justified.

I took the time to record the county-by-county breakdown of this election, which can be viewed here.

Let’s start with Ol’ Cal. There are only six counties in this proposed new state, but they have a ton of people in them. Hillary Clinton won these counties by more than 1.4 million votes. Probably a safe Democrat State going forward.

Next, let’s take a look at SoCal. This one’s a bit closer, but Clinton still would have won this hypothetical state by more than 300,000 votes. Could it be flipped Republican? Maybe. But that would require Republican gains in the coastal cities here, which has been the opposite of the trend in the last few elections.

Finally, NorCal, or the place that, based on the map, should scare Democrats the most. Clinton won that area by more than 1.6 million votes. Yes, there’s a lot of red counties up there, but they don’t have anywhere near the number of people that the coastal, blue counties do.

How would this play out?

Well, instead of having two senators for all of California, this region would have six, two for each new state. The pair in Ol’ Cal are likely to be forever blue. The same is likely true of NorCal, though Republicans could probably steal one of the two in SoCal. That means, barring some radical realignment of party politics in the new states, that Democrats would now have five senators from the area, and Republicans, one. This is significant in that there have been no Republican senators for the state since the early 90s, but also in that the Democrats would also have a likely gain of 4 senators over their current total.

The number of representatives would remain the same but would be split up among the new states. There would have to be some redistricting due to the fact that some of the current congressional districts would cross the new state lines. I’m not entirely sure how that would play out, but I suspect that it might actually hurt Republican chances here as the western, rural districts would be the most affected.

Would breaking up the state fix some of the problems?

Would it be bad for the Democrats?

Is it likely to happen?

Also, probably not. The closest we have to precedent is West Virginia seceding from Virginia in 1863, which also happened to be while the Civil War was going on. Maybe if we have another, 3 Californias will happen.