There’s a scene in Wall-E, the Pixar movie, where a ship returning to Earth has to plow through a nearly impassible field of likely-defunct satellites in order to land.

Once again, the people at Pixar were onto something that the general public wasn’t aware of.

As it turns out, space, at least the space around Earth, is turning into a giant garbage heap.

Let me lay out the basic problem for you.

Satellites don’t last forever. Even if they last a goodish amount of time, say, 10 years, they eventually go defunct or get outclassed technologically.

At this point, they’re just a large piece of space debris orbiting Earth.

But, the story gets worse.

You see, getting stuff into space is getting much cheaper.

It took me a while to dig up this data, but I compiled it into a table for easy reading.

As you can see, over time, getting stuff into orbit is getting cheaper.

I was curious about that clump of launches sitting above the trendline, and after a little bit of digging, I discovered they fell into two categories, launches made by the European Space Agency and those made by United Launch Alliance/Lockheed Martin.

ULA, on the other hand, which is a joint venture of Lockheed Martin and Boeing, appears to abuse the cost-plus pricing that goes into most government contracts in order to drive up prices. The government guarantees a particular profit margin and once ULA secures the contract with a low bid, it experiences “cost overruns,” which drive up the price.

If you remove rockets from these two from the dataset, you get this graph:

The trend is a little starker when the bad data is removed, isn’t it?

So, the good news is that getting stuff into orbit has gotten way cheaper, especially in the last twenty years.

Additionally, spaceflight has gotten so cheap that NASA started the CubeSat Launch Initiative, in which standard-sized objects are launched for around $100,000 each, which sounds like a lot, but in relative terms isn’t all that bad, especially given that ULA sometimes charges $300-400 million for a launch.

In fact, at least two projects were successfully Kickstarted and ended up launching into space.

KickSat raised almost $75,000 and applied for and received a free flight through the ELaNa (Educational Launch of Nanosatellites) program to send dozens of small satellites into space. The carrier satellite successfully launched, but a technical glitch resulted in the smaller satellites failing to deploy before it reentered the atmosphere and burned up.

Skycube raised almost $117,000 to launch a single, smallish satellite that would take pictures and broadcast messages at the behest of its backers. Unfortunately, there was a mechanical failure, and much like the previous mission, it failed to do much of anything and barely communicated back with Earth.

Eventually, the problem could grow so bad that leaving Earth would become impossible. Anything launched to a sufficient altitude would be shredded by lots of fast-moving pieces of former space junk, which in turn would intensify the problem. The only way to fix the problem would be to wait it out, and hope that enough junk would reenter the atmosphere and burn up, which could take a very long time. Humanity could be stuck on Earth for generations.

Is it a likely scenario?

Not terribly. We have ways around this. For satellites in low earth orbit disposal is relatively easy—just reenter the atmosphere and burn up.

For satellites in geosynchronous orbits, the problem is a bit trickier. They’re far enough away that getting back would require a ton of fuel, which would require extensive redesigning and dramatically increase the cost. It’s actually easier to just move the satellite further away from Earth into what is known as a graveyard orbit, an orbit far enough away that the old satellite is unlikely to interfere with new ones.

I found this cool chart that lists some of the biggest offenders when it comes to putting debris into orbit. 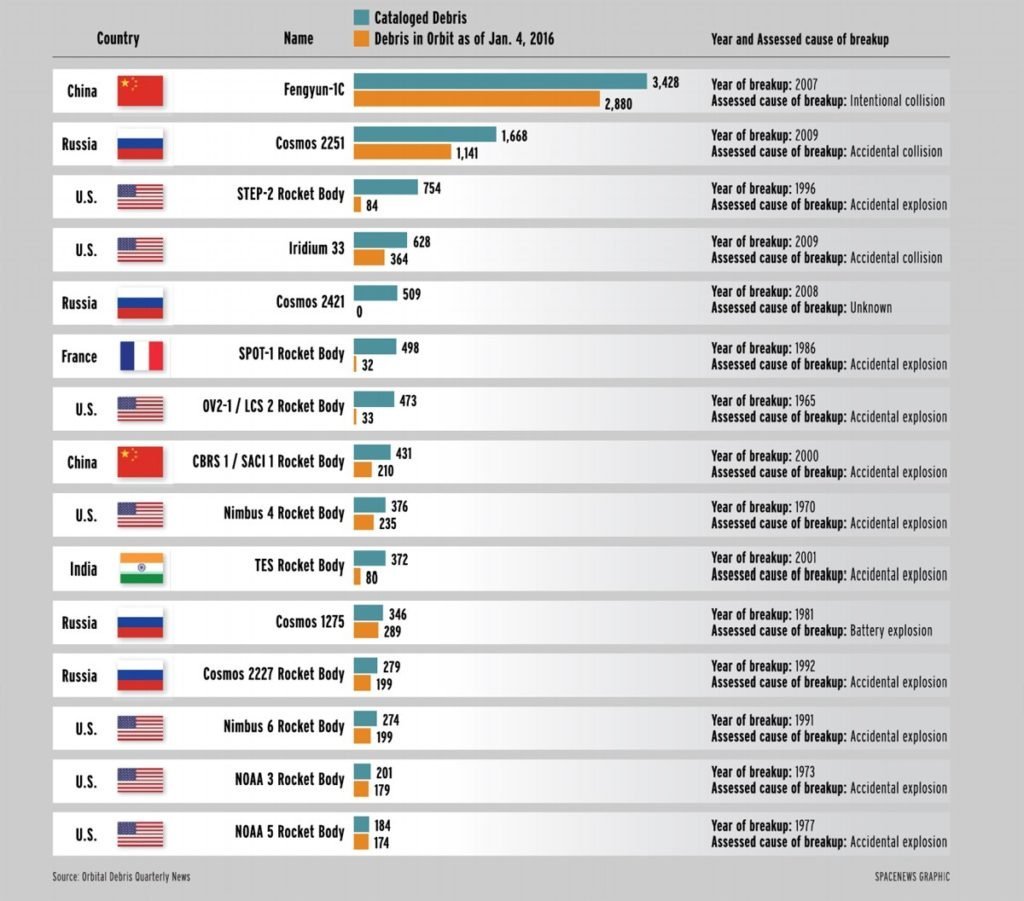 It’s worth pointing out that numbers 2 and 4 on the list were a live satellite and a dead one that collided with each other, and the number 1 entry on the list was produced by a Chinese anti-satellite missile test. On the plus side, it appears that we litter space more often by accident by design, as most of the biggest offenders were caused by accidental explosions.1

While there are a lot of proposed ideas for cleaning up space, by perhaps using big magnets or other collection systems, they are just ideas. They’re theoretical, and ultimately, they run the risk of becoming space junk themselves if something were to go wrong, as it so often seems to in space.

It’s not like you can call the nearest satellite repair company to come fix your busted satellite, or send a chain gang out to clean up the skies.

If you liked this piece, you may also like:
On Jordan Peterson
Magic Leap: A Device You’ve Never Heard of Might Just Change Everything
16 Psyche and the End of the World